When your 12-year-old daughter comes back from school with the consent form for HPV vaccine in hand, and you have to make the decision on her behalf, all the issues around informed consent come sharply into focus. My older two daughters — now adults — missed the boat on this one. Like all women preceding our current generation of youngsters, their ability to live alongside human papilloma viruses (HPVs) is sealed by millions of years of evolution alongside these viruses and other microbes, the vast majority of which are non-pathogenic and many of which are beneficial or commensal.

My youngest two daughters, however, face a new predicament — one that’s only been on offer to humans for a decade: the HPV vaccine. Should or shouldn’t they be exposed to a genetically engineered vaccine, hailed as the best shot at cervical cancer prevention?

It’s an issue we’ve reported on before, so we won’t duplicate information we’ve already provided. Following is a selection of some of our previous pieces (in reverse chronological order) on the HPV vaccine and informed consent:

Signing on the dotted line

My daughter came home with 3 papers in hand. One was a letter from NHS England with the subject “Good news – Beating cervical cancer”. The second was a “Vaccination consent form” that offers the parent or guardian two choices:

At the bottom of the form is a statement that says, “Any side effects following the HPV vaccination should be reported to the school nurse or your GP”. This is interesting as I have now met with many young girls who have developed severe reactions, which were reported to schools or GPs and were rapidly dismissed as not being linked.

The third item that my daughter brought home from school was a folded leaflet entitled “Beating cervical cancer” that is also available electronically.

The big question for my family earlier this week was: what information was being provided, and was this sufficient to make an informed consent?

The reality is that the information my daughter was given, information that's intended to help guide us in this very important decision, amounts to — in my personal view — a sales pitch for Merck (the vaccine's manufacturer).

It couldn’t be described as anything approaching the provision of all relevant, currently known information about the likely benefits and risks of HPV vaccination. It also gave away nothing about other options available, should we choose to not go down the vaccination route for my daughter.

Yet, my daughter also has a legal right to accept vaccination in the event that we, as parents don't provide our consent. In the UK, as school nurses are the primary party administering vaccines, they also — somewhat incredibly in our view — have the right to vaccinate against the will of parents or guardians if they have assessed the potential recipient of the vaccine as Gillick competent. With only 12 years of life in the tank, a sales pitch thrown at them and a mass of information withheld, is the original subject matter — contraceptives/birth control — decided by the House of Lords in 1986 (Gillick v West Norfolk and Wisbech AHA [1986]) really of relevance to HPV vaccination?

Our petition (please sign if you agree with it and haven’t already done so) spelt out the definition of informed consent: “Informed consent means that all relevant information should be available before someone is asked to decide about their own, or their child’s, vaccination. This should include the known benefits and risks, as well as any alternatives, to the proposed treatment.” We linked this explanation to a legal primer to remind readers of the legal importance of providing information about alternatives to the proposed treatment.

What they haven’t told us

We could write a book about this, but everyone’s time challenged. So here’s a summary:

Infographic: are UK citizens being short-changed on safety data?

Comparing safety data on patient information leaflets for quadrivalent Gardasil in the UK and USA. 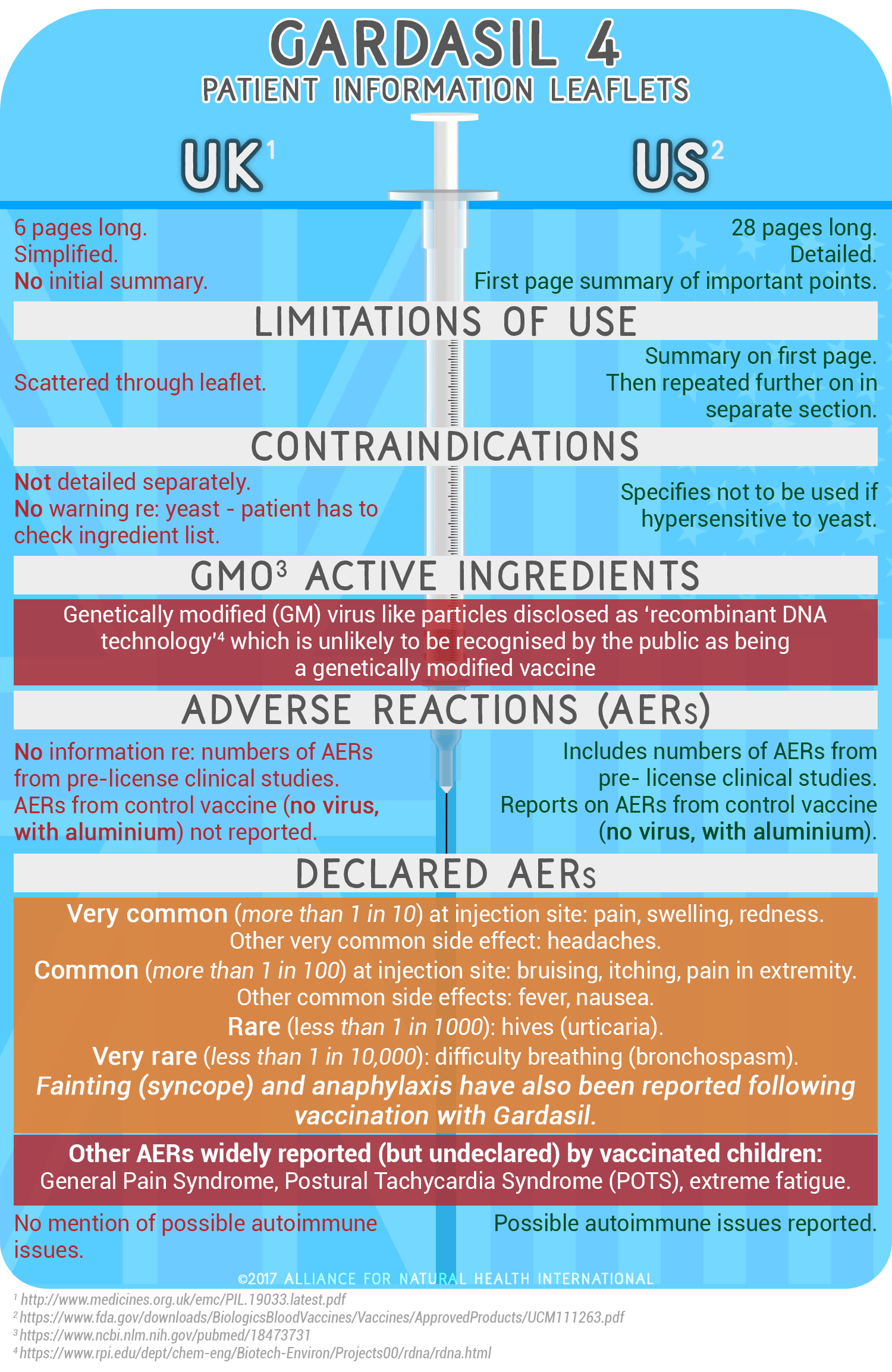 There is more than one option

In order to be true to the concept of informed consent, parents and guardians should be given more information about options available. These might be as follows:

Option 1 – The HPV vaccine option: Go for the two vaccine shots, the second shot being between 6 and 24 months after the first. Accept any associated risks from adverse events and as adults, maintain cervical screening (Pap tests). As noted by Dr Stella Heley of the Victorian Cytology Service in Melbourne, Australia, Pap test abnormalities will still be seen in many vaccinated women because of HPV exposure prior to them receiving the HPV vaccine.

Option 2: The no HPV vaccine option: Help build natural immunity through healthy diet and appropriate lifestyle, minimise any risk of sexual activity prior to puberty, and regular cervical screening for women over 30.

Option 3: Cervical cancer screening only (for women over 30). Even the smallprint in the the UK Gardasil patient information leaflet states “Vaccination is not a substitute for routine cervical screening. You should continue to follow your doctor’s advice on cervical smear/Pap tests and preventative and protective measures.” The US GARDASIL leaflet states: “GARDASIL does not eliminate the necessity for women to continue to undergo recommended cervical cancer screening“.

With boys increasingly being targeted, information provided prior to consent should include the natural history of HPVs in men as well as women including the fact that clearance of infection by immune system typically occurs within 12 months.

The unknown consequences of tampering with our virobiome

Finally, let me speculate a little – as an ecologist and health scientist. Health authorities like to make out that the science on cervical cancer, HPV and the HPV vaccine is a done deal. That couldn’t be further from the truth.

We know surprisingly little about the importance, benefit and harm associated with interactions between viruses and humans.

The pattern of research in this field seems to be following a similar trajectory to that of our knowledge of bacteria and humans. Fifty years ago, with the advent of antibiotics, it was usual to consider all bacteria as potentially pathogenic and fair targets for antibiotics. We now appreciate the problems associated with antibiotic over-use, their impact on the gut microbiome and the creation of antibiotic resistant 'superbugs'. We also understand that we can’t live without trillions of beneficial and commensal bacteria in our gut microbiome. This microbiota includes non-bacterial microorganisms, including viruses and fungi.

Science is beginning to point towards viruses not being solely the ‘bad guys’. As genetic sequencing technologies develop, we are just beginning to understand the relevance of our virobiome and virobiota, which are closely associated with bacteria, including those several trillion that reside in a healthy gut that has not been hit with antibiotics.

This coevolution between viruses and humans goes back over millions of years. With respect to the 200 or so types of HPV, and even more specifically the so-called high risk (HR) HPV-18 strain, this relationship can be traced back at least 12,000 years.

And here’s the rub, and one of my most deep-rooted concerns. Distorting this co-evolution by way of a prophylactic, genetically modified vaccine loaded with aluminium could trigger the development of more pathogenic strains of HPV. A detailed study of the ecological and evolutionary dynamics of HPV led by Paul Orlando and colleagues at the University of Illinois in Chicago and published in 2011 concluded that “the elimination of HR HPV through vaccines may alter the evolutionary trajectory of the remaining types and promote evolution of new HR HPV types.” Therefore, it is perfectly within the realms of possibility that our prophylactic vaccine campaigns targeting HR HPV strains could result in a new dawn of super-viruses.

Equally, this interference within an ever wider range of viral strains that have co-evolved alongside humans could impact the development and maturation of our immune systems more generally. Who are we to assume that our immune systems can develop fully and properly without the viral, bacterial and fungal elements of our microbiome? Contrary towhatis commonly reported, the natural history of HPV commonly involves the transfer of HPV from mothers to their babies, a process that has clearly existed prior to the dawn of humankind.

So - let’s look before we leap. And most importantly, let’s make sure we have as much of the available and relevant data as possible in front of us before we make decisions about the welfare of our most precious assets, our young daughters – or sons.

Governments have a long way to go on this front and we need to stand shoulder to shoulder and hold them to account for withholding information.

Get the word out!

Please forward this widely, including to your loved ones, friends and political representatives, ensuring that s/he does more to ensure that information required for properly informed consent is made readily available to parents, guardians and children prior to consent being given.