If you’ve followed our work for any length of time, you’ll know we’re no strangers to the scientific antics of Germany’s Federal Institute for Risk Assessment (BfR) when it comes to ludicrously low vitamin and mineral levels. Since its first attempt at setting maximum vitamin and mineral levels for food supplements in Germany back in 2005, ANH-Intl has repeatedly shown that its data is “meaningless for the majority of the population”. Well, BfR is at it again — this time with magnesium, one of the most essential minerals for life, needed for bone health and muscle contraction, as well as over 300 biochemical reactions in the body.

Yesterday BfR released a new opinion stating that the maximum daily level for magnesium in food supplements should not exceed 250 mg. We’d not waste our or your time considering this opinion or writing about it, if the BfR didn’t hold a fair amount of sway in Europe, with the European Commission (EC), the European Food Safety Authority (EFSA) and with many EU Member States that view Germany as the micronutrient expert country. Germany has after all spawned pharmaceutical giants like Merck, Bayer and BASF. Interestingly, the latter were among the post-WWII spin-offs from IG Farben, the company that made Zycklon-B used in the gas chambers during the holocaust.

Why is magnesium so essential?

Magnesium is a cofactor in more than 300 enzyme systems that are needed to maintain life and health, from protein synthesis, to muscle and nerve function, blood glucose control, and blood pressure regulation. Magnesium is also needed to produce energy. It contributes to the structural development of bone and is required to make DNA, RNA and the antioxidant, glutathione, key for phase II detoxification. Magnesium is involved in nerve impulse conduction, muscle contraction, and crucially, maintaining normal heart rhythm.

An adult body contains stores of around 25 g magnesium, with about half of this in the bones and almost all the rest in soft tissues including muscles. Whilst magnesium levels are usually measured in blood, there’s actually less than 1% of total magnesium in blood serum. A recent paper highlights the fact that serum magnesium levels do not accurately reflect body magnesium stores, and chronic magnesium deficiency is not widely recognised.

According to BfR President Prof Dr Andreas Hensel, "Food supplements are in vogue, and many people believe that they can provide health benefits. But the consumption of food supplements may also be associated with health risks. The best nutritional strategy basically involves a balanced and varied diet with plenty of fruit and vegetables. Such a diet supplies a healthy body with all essential substances. In most cases, therefore, food supplements are superfluous."

One senses that the BfR would prefer people to rely on licensed drugs, despite these being the third leading cause of death after heart disease and cancer. Ironically, increasing magnesium status to well above standard reference levels is one of the most reliable ways of reducing death from heart disease (see below).

The health risk that BfR references with regard supplemental magnesium is loose bowels – mild diarrhoea. Its answer to this perceived problem is that food supplements are not necessary because a balanced and varied diet with plenty of fruit and vegetables supplies a healthy body with sufficient magnesium. In its view, this is the same for athletes and the active.

Table 1 provides examples of magnesium-rich foods and Table 2 considers risks and benefits of magnesium, as well as ANH-Intl's view on the optimal therapeutic intake range for the mineral. 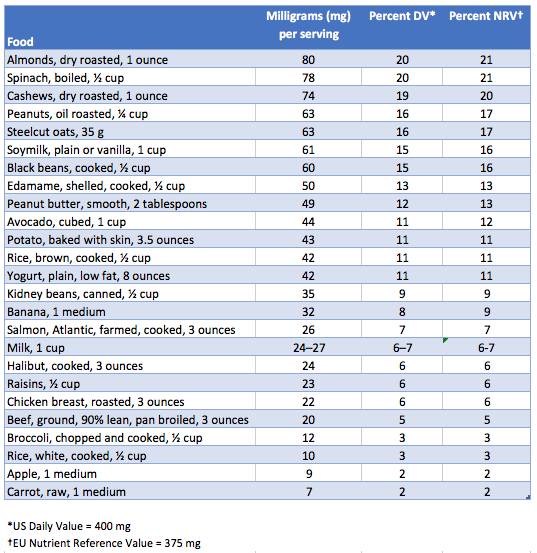 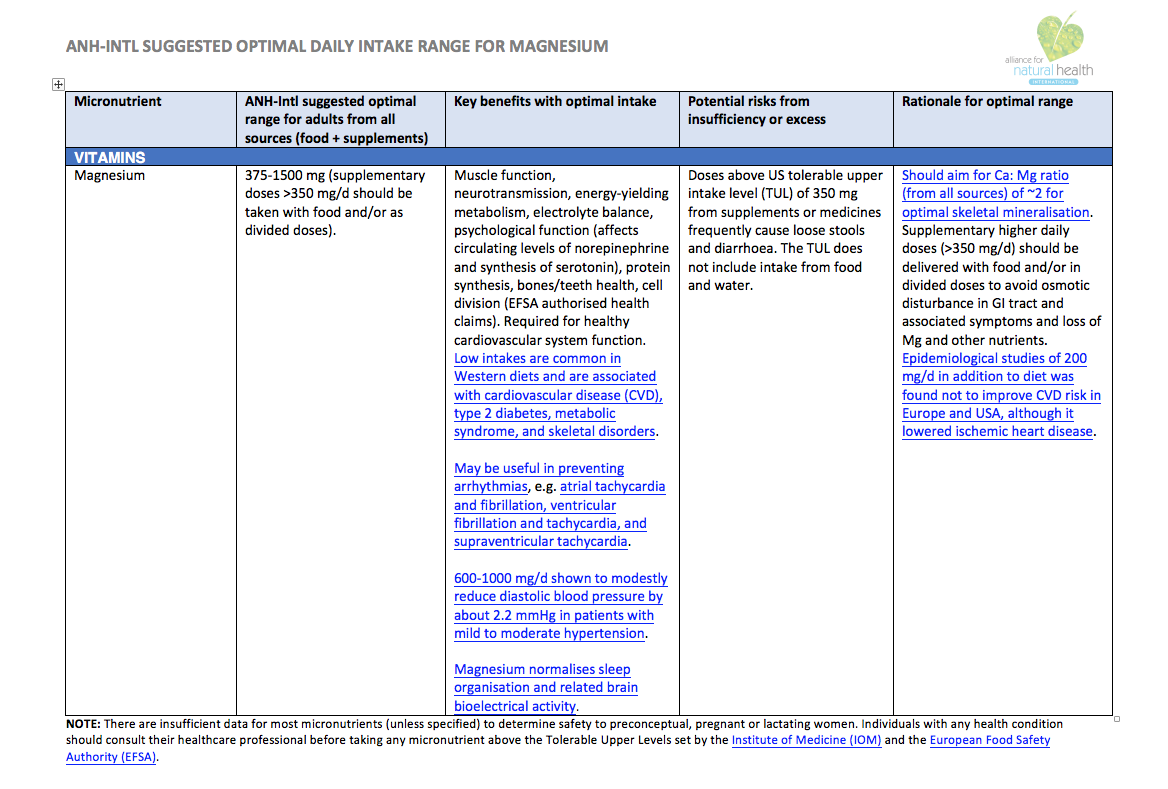 The current commonly-used clinical reference range in conventional medicine for circulating magnesium in serum (blood) is 0.75 – 1.25 mmol/L, yet levels as low as 0.66 mmol/L are generally accepted as normal. Integrative and functional medicine practitioners are more focused on optimal amounts for health, rather than just adequacy to prevent life-threatening deficiency. As such, optimal ranges are typically significantly higher, such as 1.00 – 1.25 mmol/L (Table 3).

We spoke to Jonathan Cohen, Director of the FunctionalDX blood chemistry screen, who told us, “After seeing hundreds of tests, I recall no more than 1 to 1.5% of all tests I have seen ever showing a plasma level over 1.0 mmol/L. The vast majority tend on average to fall between 0.75 and 0.85 mmol/L”.

Cohen, himself an integrative medicine practitioner of many years standing, went on to say, “If I was to go out on a limb I would suggest that one would have 2 standards; for the healthy and the unwell, who definitely will need additional magnesium. Any standardisation lower than what we have now is a potential health risk in itself”.

It should also be noted that while athletes, especially endurance athletes, will typically be viewed as healthy, in order to maintain 'normal' or 'optimal' ranges in serum, their intake might need to be much higher than a normal person. That is because magnesium use in muscle fibres and, hence, its removal from body stores, will tend to greatly exceed that of a non-athlete.

We have a number of major concerns over BfR's opinion: