Home News Autoimmune disease - a hidden pandemic within a pandemic

The launch of our ‘Right to kNOw’ campaign today is aimed at stopping discrimination against the autoimmune, and coincides with Coeliac Awareness week in the UK.

Coeliac disease is an autoimmune disease driven by the consumption of gluten — the protein in grains like wheat, barley and rye — which can cause some people’s immune systems to attack cells in their own body instead of foreign invaders. In the case of coeliac disease, it’s the lining of the gut that the attack is focused upon.

Autoimmune disease (AID) is a major, hidden, diverse and rapidly increasing, health problem. It knows no boundaries and can affect anyone regardless of age, ethnicity or gender, but women are more susceptible than men. The number of people suffering from one or more AIDs has risen exponentially in recent years. Whilst the true extent of the problem is not fully known, it is causing an enormous drain on healthcare systems and ruining the lives of many.

Over 80 autoimmune diseases have been identified to date, with more being found every year — and they can affect any part of your body depending on your individual genetics. Search the internet and you will find a multitude of different awareness events for the profusion of autoimmune conditions that are literally robbing people of their health. In March, the American Autoimmune Related Diseases Association (AARDA) organised Autoimmune Disease Awareness month, whilst in April, the Global Autoimmune Institute ran another awareness event.

Symptoms from the many different autoimmune disease are very diverse, and are the result of the breakdown of the natural self-tolerance mechanism in the body. Once this has happened, particular cells or tissues are targeted by the body's own immune system, manifesting in the very wide variety of autoimmune diseases. Symptoms can also differ greatly from person to person and can affect some or all organs and tissues, crossing medical specialities, which makes diagnosis fraught with difficulty.

Many people spend years going from one specialist to another before their illness is given a label and treatment is offered. The body of an autoimmune individual is no longer able to recognise its own cells or tissues (self), which causes the confused immune system to see them as foreign antigens, proteins, substances or invading pathogens (non-self) and take defensive action.

Complex interactions arising from genetic predisposition, vulnerable barriers (e.g. skin, gut or lungs) and a range of environmental triggers (that may be external or internal) give rise to what’s often referred to as the ‘mosaic of autoimmunity’.

The triggers for the development of autoimmune disease are many and varied ranging from infections, trauma, chronic emotional stress, gut dysbiosis, poor food choices and chemical exposure to name just a few.

New journal papers are raising the red flag over the risk of some individuals’ immune systems overreacting to SARS-CoV-2 to the point their immune system becomes so dysregulated as to go down the autoimmune path. In this paper, published in Nature, researchers are pursuing the idea that infection with SARS-CoV-2 is driving the development of autoantibodies, which in turn heightens an individual’s response to the disease. This is not a new theory in relation to viral infections though, with scientists previously identifying numerous instances where an infection triggers an autoimmune reaction.

Publishing in Frontiers in Immunology researchers sought to determine whether infection by SARS-CoV-2 can trigger an autoimmune reaction. A diverse range of human tissue types were found to react against SARS-CoV-2 antibodies. Out of 55 tissue types tested 28 reacted indicating the possibility of the development of autoimmune conditions following infection. The team behind the research raise a red flag in regard to the very “daunting and real” possibility that new vaccines being developed to counter covid-19 will further trigger the development of autoantibodies leading to an increase in autoimmune disease in susceptible individuals. As the vaccines have had limited testing in healthy populations and are being used under emergency use authorisations, humans are literally taking part in a massive experiment.

To support the launch of our new campaign we’re sharing some of our previous articles on autoimmune disease to help you understand this most misunderstood and poorly recognised of chronic disease categories.

Informed by the research and views of Prof Yehuda Shoenfeld, the ‘father of autoimmunity’, we consider whether the current pandemic could trigger a super-epidemic of autoimmunity

There’s been increasing concern voiced by world-leading immunologists that we could soon witness a devastating super-epidemic of autoimmune diseases. Some think it’s our exposure to the SARS-CoV-2 virus that’s the major concern. While others are more worried about the novel, still experimental vaccines, delivered at an unprecedented scale. But could it be both? In this piece, we aim to get under the covers of this complex area that’s been getting very little airtime in the mainstream media.

The underlying mechanism that links all these diseases is the loss of self-tolerance. As a result, the body starts to attack healthy cells or parts of itself, leading to the characteristic symptoms of one of the myriad autoimmune diseases. 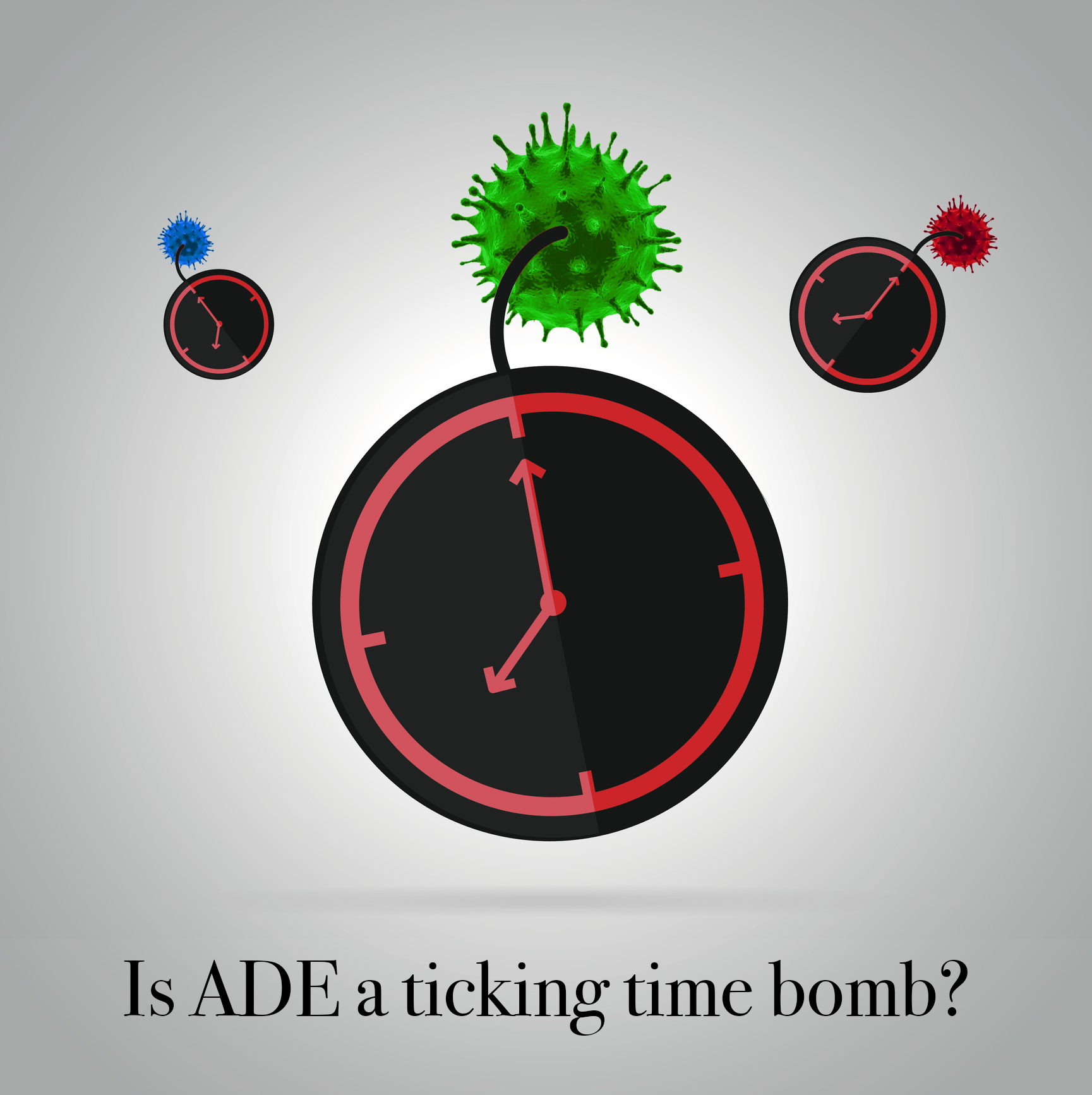 Too few irons in the fire or out of the frying pan?

Associate Professor of Health Sciences Adam MacNeil at Brock University, Canada and his PhD student Jeremia Coish were among the earliest to warn, last June, of the dangers of not looking very carefully at the possibility that vaccines might trigger antibody-dependent enhancement (ADE) of disease. This could mean that people who are vaccinated might, paradoxically, suffer more severe disease when exposed to the wild virus than if they hadn’t been vaccinated

In their aptly titled article, “Out of the frying pan and into the fire? Due diligence warranted for ADE in COVID-19,” published in the journal Microbes and Infection in June 2020, they argue that ADE is well known to be a risk for coronavirus-mediated infections, as well as dengue. For those not already familiar with ADE, it is the paradoxical immune response that makes a person who was previously exposed to the disease, or a vaccine targeting it, more – not less – susceptible in the event that they’re subsequently infected. 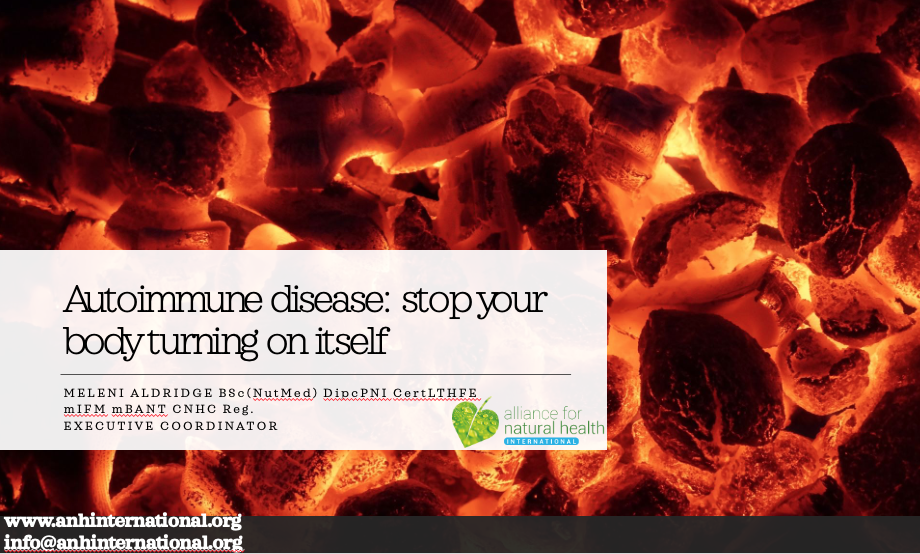 Autoimmune disease - stopping your body turning on itself

Autoimmune diseases are on track to eclipse heart disease as the number one killer in the Western world. Yet it remains an area of healthcare that isn’t well understood or often, appropriately addressed by conventional medicine, leaving many people suffering needlessly.

Meleni’s personal journey through her own autoimmune disease and return to vibrant health, gave her second presentation at the Get Well Show in London (2020) a uniquely personal, yet informed, dimension. Combined with over 30 years of clinical experience filtered through different therapeutic lenses, Meleni’s presentation offers multiple reasons why your body may be turning on itself and how to turn back towards wellness.

Please note: you can purchase a copy of Meleni’s presentation from our web shop. 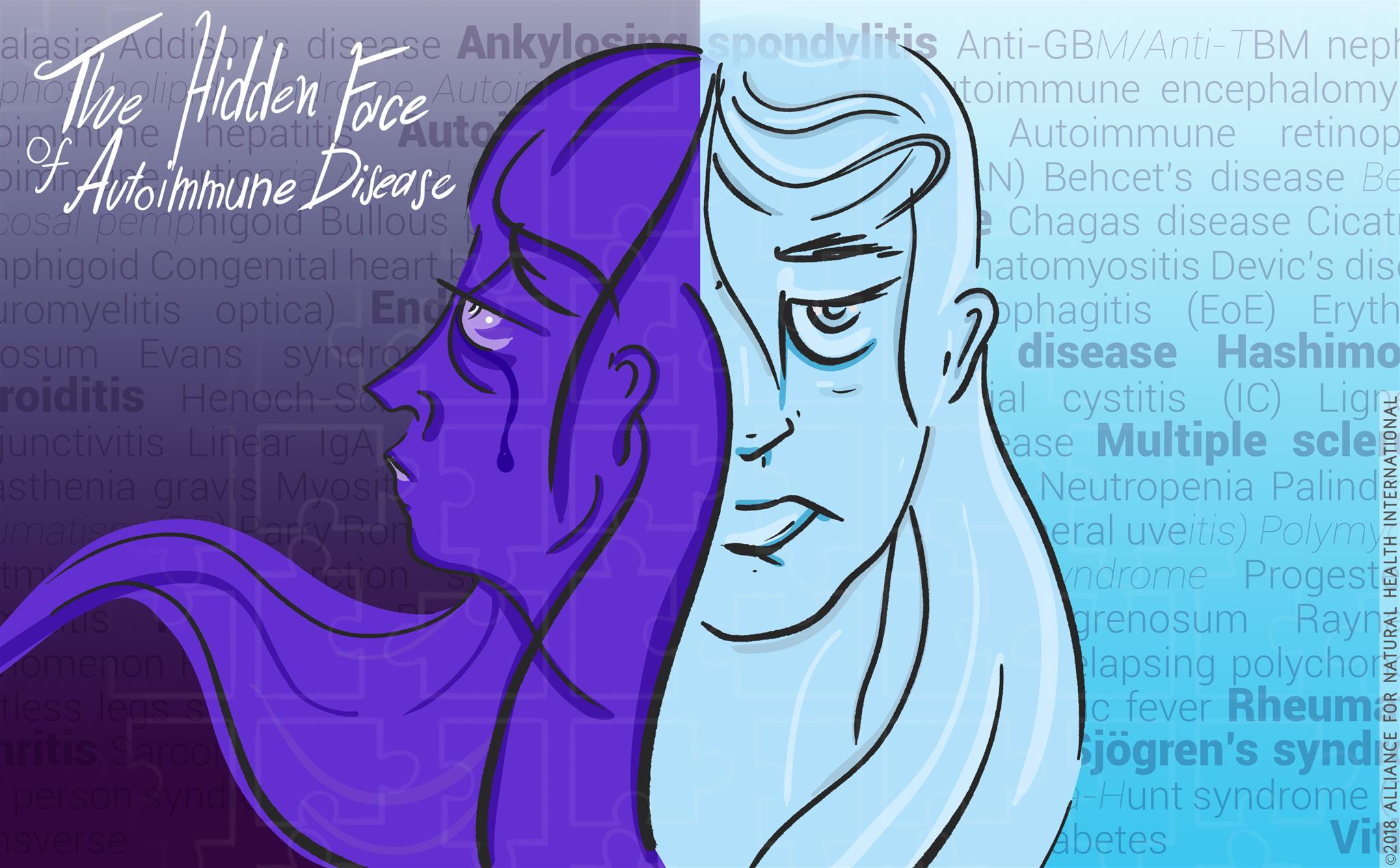 As we discussed last week, the skyrocketing increase in autoimmune disease could soon eclipse heart disease, the no 1 killer in the Western world. We described the role that gluten plays, but we didn’t discuss gender or the contributory role emotions play in the development of an autoimmune disease. This week’s article is based on Dr Keesha Ewers’ brilliant lecture, Stress and Autoimmune Disease, at the Institute for Functional Medicine’s 2018 annual conference.

In short, if you’re a woman with a challenging emotional landscape, you are up to 10 times more at risk of developing certain autoimmune diseases – and you may know nothing about it for twenty to thirty years. Eighty percent of all autoimmune diseases diagnosed are in women and once the seal is broken so to speak, there is a 75% chance of developing more if the causes aren’t fully addressed. 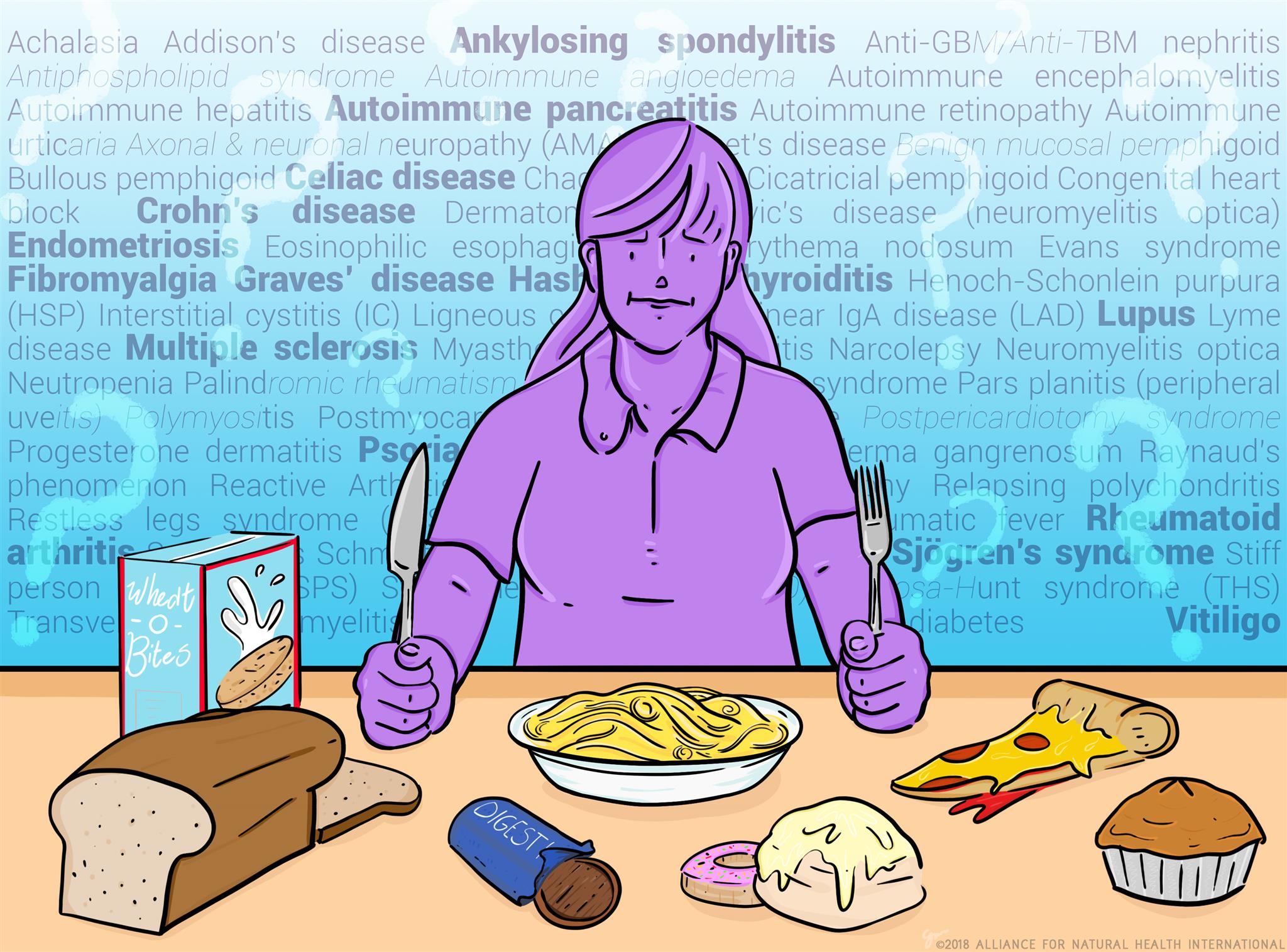 Are you courting autoimmune disease with your daily staple?

Why eating gluten really is nutrition’s equivalent of Russian Roulette

In case you hadn’t noticed, as a society, we are now dying slowly (mostly uncomfortably and painfully) from chronic inflammatory and metabolic diseases, not fast from acute infections as our ancestors used to. Interestingly nothing much has changed in 40 years as far as genes and environmental triggers go, yet acute chronic disease rates continue to rise. Would it surprise you to know that we’re not born with the destiny to develop chronic inflammatory diseases (CIDs)? The stark fact is that our current health crisis is not down to genetic changes or pathogens (infections), it’s down to something we are doing to ourselves and the planet.

I’ve just had the extreme pleasure of sitting in 3-days of back to back presentations on all aspects of autoimmune disease (AID) at the Institute for Functional Medicine’s 2018 Annual International Conference. I know this might not seem like everyone’s idea of a good time, but we practitioners are a strange lot! The conference focused on the interplay of the gut, genes and the environment in an attempt to stitch together the ‘puzzle of autoimmunity’. Given that more than 100 autoimmune diseases have been identified, there was a lot of ground to cover. Yet, despite multiple diseases and multiple symptoms the causes and treatment approaches are often much the same.

>>> For the repository of our articles, videos and features covering the events of the last 14 months, visit our Covid Campaign page