Home News Pandemonium within a pandemic

Last week we released a video on the 15 unknowns about the Covid vaccines almost every human on the planet will be offered, probably some time next year. The fact that within a week the video had more views than any other we’ve produced is likely as much down to the poignancy of the subject we addressed, as the professionalism delivered by our new in-house motion graphics team.

One of the challenges for many of us going forward, is the lack of congruence in approaches and views. We all know what happens when everyone starts pulling in opposing directions: not a lot. Deciding to switch off large parts of national economies throughout the industrialised world; racking up unprecedented budgetary deficits without knowing how or by whom it will paid back; using shaky data as suggested by KPMG geopolitical analyst Sophie Heading to forecast economic (and employment) prospects going forwards; not knowing how many people have been infected or may carry immunity, and not knowing if or when life will get back to ‘normal’, are just a few of the issues that make for an incredibly uncertain future.

It seems that uncertainty is about the only thing we can be certain about. If we propose that science and economics are two disciplines that we always would have considered to be pivotal to our future during a pandemic of this nature, you wouldn’t be the first to have been surprised that these two well-established disciplines have not delivered more reliable, consistent or certain views that could form the basis of consensus.

We would like to suggest here that it’s not so much the lack of maturity of these disciplines, but rather their distortion or avoidance by political powers and business interests, that have been the flies in the ointment.

Distortions that result in pandemonium

We look below at two key areas that are critical to our emergence from the Covid crisis that have been subject to distortion or avoidance by governments, health authorities and the mainstream media. The first is naturally-acquired immunity, the second is the use of effective treatment protocols that can reduce mortality. (We’ll leave the economists to debate the discrepancies around economic strategies and prospects).

During our evolution as a species, two things have been central to us overcoming pandemics. The first is the ability of surviving populations to develop natural immunity to the pathogen in question, the other is the declining virulence of the pathogen itself. With covid, 6 months on, there’s still very little agreement about what’s really going on. This, in part, is because the kind of investment that’s been made in vaccines hasn’t been matched in trying to understand natural immunity – let along what we could do to improve it.

Under ‘light’ lockdown conditions, only 6.1% of Swedes had apparently developed antibodies by mid-June. Positive antibody tests are a little higher now, around 10%. But that doesn’t mean only 10% of Swedish people have immunity. That’s because a) antibody tests are not accurate, being less capable of accurately determining past infection in those with milder symptoms or in women (who are generally less vulnerable). Additionally, raised Covid-specific antibodies aren’t our only form of immune protection. The adaptive immune system that provides the delayed response to infections has two main components, the humoral side that relies on antibodies that can directly mark or inactivate the virus. The other side is the cell-mediated side of the immune system that involves T-cells. You’ll find out more about the basics of immune system function in relation to Covid in our Adapt Don’t Fight video released in late March.

With this is mind, it’s useful to look at Sweden, with its widely criticised ‘light’ lockdown approach. In our view it’s been the only country that could argue its approach to the pandemic has been guided by science. That’s because it has accepted that public exposure to the virus is the best way of getting through it – on the condition that the vulnerable are protected. The latest spike in infections has been a target of the media, but that’s largely down to increased emphasis on testing.

The important data out of Sweden relates to Covid-related deaths, not infections. The Our World in Data figure below shows (via a log scale) the degree to which mortality rates in Sweden have dropped, compared with the UK and USA, despite low levels of antibodies. 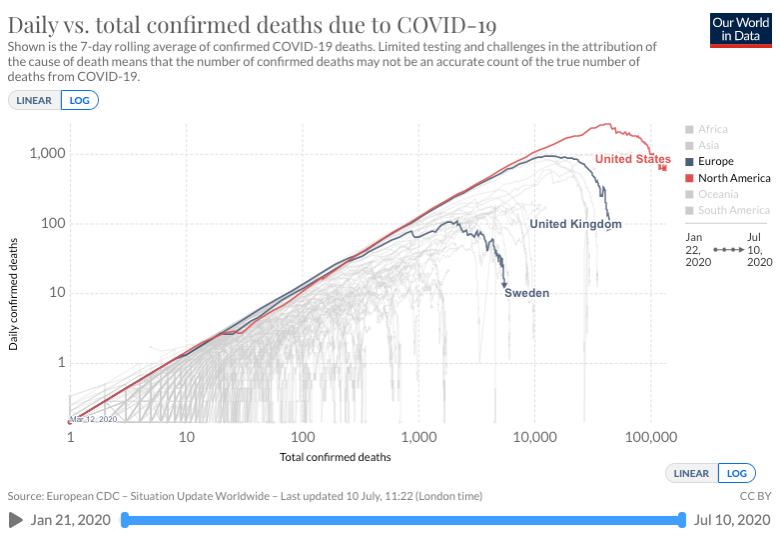 This despite bars, cafés, restaurants and schools never having been closed. One possible explanation for this is that the wider exposure has contributed to a greater and more effective T-cell response. Overall Covid-19-associated mortality in Sweden over the last few months has been on the higher side per capita population compared with its European neighbours (around 54 per 100,000 population, as compared with 11 per 100,000 for Germany, 36 per 100,000 for The Netherlands, 61 per 100,000 for Spain and 84 per 100,000 for Belgium; source data from Worldometer). But now mortality continues to crash despite life having largely returned to normal and containment and mitigation strategies having been much lighter than most other Western countries. Could it be because the T-cell responses in a more exposed, largely mildly infected or asymptomatic public has provided protection? This hypothesis has preliminary support from a Swedish study by a team from the Karolinska Institute that’s just been published ahead of print. The study proposes that robust T-cell responses observed in non-hospitalised individuals who were either asymptomatic or mildly infected from natural exposure to the virus may protect against future infection surges.

Only time will tell if the wider exposure of Swedish people to the virus will offer greater immune protection with a consequent lower risk of resurgence later in the year. Dr Anders Tegnell, who heads up the Swedish coronavirus programme was understandably frustrated by the World Health Organization (WHO) categorising Sweden as at high risk of resurgence. But we know the WHO has never had much faith in natural immunity, putting most of its eggs in the uncertain vaccine basket.

As we have said before; if we could only treat patients seriously diseased with Covid more effectively and prevent deaths and suffering, we could all go back to life as normal. What we are in fact seeing is what appears to be a deliberate attempt by authorities to avoid taking seriously the experiences of those clinicians working with seriously ill patients who have very good outcomes (zero or very low mortality levels).

We provide below three protocols that deserve serious consideration by health authorities. Yet all of them continue to be marginalised, probably because they include natural agents or unpatented medicines.

Click here for a video plea to US health authorities by Dr Procter.

As the first wave of infection has now passed through most countries, the world, geopolitically and socially, is entering an ever more precarious state – probably more because of the way it has responded to the virus, rather than because of the actual impacts of the virus itself.

The fact that the Swedish approach to Covid, or protocols being used by physicians in the US that rely on natural products or unpatented drugs with demonstrated clinical effectiveness, continue to be side-lined by authorities reminds us how careful we need to be in filtering information around us.

If we could be 100% sure a vaccine would work and be safe – it would be different. A paper published in the New England Journal of Medicine sets out a 6 criteria framework that could be used by states in the US to impose mandatory vaccination, at least for some population groups.

We dearly hope that vaccination doesn’t become the key issue moving forward. It may be where the majority of healthcare resources are being invested presently – but to ignore ways of safely building naturally-acquired immunity or treating sick patients more effectively would be a travesty both of science and history.