Big Food has recently emerged from a scandal that should have made media headlines for weeks. In actual fact, it never made headlines, but it did get a few column inches. The scandal relates to Big Food’s conspiracy with governments to orchestrate the ‘low fat’ policy which aimed to curtail skyrocketing heart disease rates yet led to more heart disease owing to people eating more sugar and simple carbs and more of the wrong fats. It was closely allied to another scandal, Big Pharma’s policy to make doctors and the public believe that cholesterol lowering especially via statins, would have a similar effect.

Well, Big Food is at it again, this time with obesity, which in turn is largely a product of metabolic syndrome that underpins the type 2 diabetes epidemic. With around half the UK population, to take one example, expected to be obese by 2050, any foods targeting this market are expected to be very well received. Unless of course the public works out it’s another Big Food scam.

We know Big Food has done its best to exploit our ‘sweet spot’, leaving us wanting more and more foods that are deficient in nutrients but high in sugar, salt and processed fats. While the salt issue is something of an anomaly as it depends on which form of salt, imbalanced polyunsaturated fats (too much omega 6 and not enough omega 3) are most definitely part of the problem, rather than being part of the solution.

Our food supply systems, as delivered to the public via supermarkets, are no longer about providing optimal nutrition. Instead, they are much more about delivering maximum profits to the handful of Big Food companies that drive and control the sector – globally. 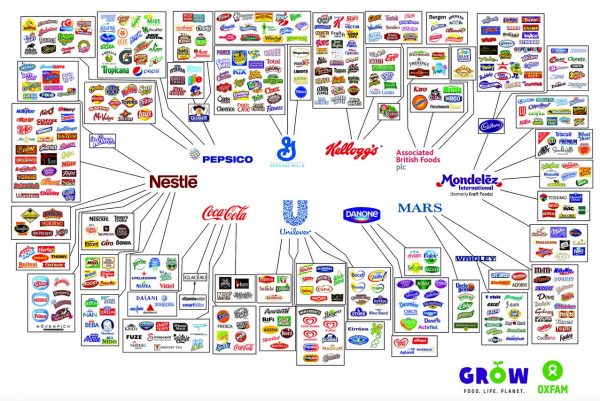 The 10 companies that make most of the foods and drinks in your supermarket [courtesy Oxfam America, 2014].[/caption] In fact, there are just 10 main corporations that control the manufacture of the majority of the foodstuffs we buy at the supermarket.

This makes these multi-national corporations so powerful they can influence government policy on what to say in regards to the eating guidelines many of them produce. These corporations include Coca-Cola, Nestle, Associated British Foods, Kelloggs and Mondelez (formerly Kraft Foods).

Most of us who live in what we like to consider the ‘free world’ celebrate the freedom it offers. The challenge, however, is it’s not as free as some of us would like, while others, especially those running the largest corporations on the planet, appear to be free to avoid any responsibility for the harm attributed to their products.

This week, FoodDrinkEurope, the EU-wide association of Big Food companies, issued a press release about the release of its Eat & Live Well website that caught our eye. Following is an extract:

As part of FoodDrinkEurope's latest Framework Commitment to the EU Platform for Action on Diet, Physical Activity and Health, this initiative gathers a wide range of existing and new actions taken by national food and drink federations, European sectors and individual companies (including SMEs) to promote healthier choices.

From salt reduction in certain products to specific food ranges for healthy ageing, portion sizes, research and innovation, consumer information, responsible marketing & advertising, health-in-the-workplace programmes, and so on; progress and achievements will be reported on a yearly basis, in full transparency.

FoodDrinkEurope's Eat & Live Well repository will hopefully serve as an inspiration for the rest of the industry and other actors who can altogether make a difference in encouraging healthier lifestyles while not forgetting about the pleasure and the art that eating and drinking are – and should remain.”

Well, well. Has Big Food, that is almost universally seen as the real culprit in the current chronic disease epidemic, seen the light and found a solution – or better still – multiple solutions? Sadly, we think not.

The press release heralds the release of FoodDrinkEurope’s Eat & Live Well website that celebrates some of its members’ initiatives and, more importantly, we believe, sets the party line for Big Food’s exploitation of obesity – more correctly, overweight and obese individuals. The website boasts about Kelloggs’ support for breakfast clubs and Mars’ schools’ programme, the latter being about putting vending machines into schools with smaller chocolate bars (that don’t exceed 200kcal) that still get kids addicted to sugar-loaded chocolate. Think of it in the same way as tobacco companies selling packs of 10 to get people addicted to facilitate their graduation to packs of 20s later on.

On the dietary front, what FoodDrinkEurope is celebrating is a very far cry from proper healthy eating and lifestyle advice that will genuinely impact obesity. If FoodDrinkEurope were serious about doing something that really made a difference, its advice would be something like ANH’s own Food4Health guidelines.

Food manufacturers are also proudly proclaiming how they are helping consumers by putting clearer labelling on their products. But does this stop consumers from purchasing their highly processed foods? The evidence suggests not.

The website is also celebrating product reformulation initiatives which include replacing sugar in foods with artificial sweeteners (that can yield many similar as well as additional health issues compared with sugar), creating lower salt seasonings for use in sausages (what about the quality of the meat used, the common addition of gluten-containing fillers, and nitrite preservatives?), developing better breakfast cereals by reducing salt and sugar and adding back the fibre that has been stripped during processing, changing fat quality in pigs by feeding them rapeseed oil (not something pigs would naturally eat) or helping SMEs to change their product recipes without compromising on taste (whatever that means!).

On the surface, FoodDrinkEurope’s trumpet-blowing might all sound wonderful to those with no ability or inclination to dig a little deeper, but at the end of the day, Big Food is still hell-bent on producing and selling highly processed foods that lack nutrient density and diversity and are full of simple carbohydrates, gluten-containing grains and imbalanced fatty acid ratios. Whichever way you look at it, Big Food’s offerings, with or without reformulation, will continue to be major contributors to the overweight and obesity crisis.

It’s worth bearing in mind that Big Food’s collaboration with EU authorities failed spectacularly between 2007-13 with the EU Strategy on Nutrition, Overweight and Obesity-related Health Issues. And it’s going to carry on failing unless something substantially different is done.