Home News Death in Europe and the US of A

You’ll recall our position, and that of many others, that ‘excess mortality’ is one of the few metrics that gives us a realistic view of the seriousness of the current pandemic. It tells us the amount of additional mortality over the number expected, generally based on the previous 5-year period.

This is a different viewpoint compared with the mass hysteria being projected by the mainstream media. Also the view that the current situation is ‘as bad as’ or ‘worse than’ the first wave is misplaced. You can see this in the chart below that we’ve created by selecting a few key countries from Our World in Data (Fig. 1). 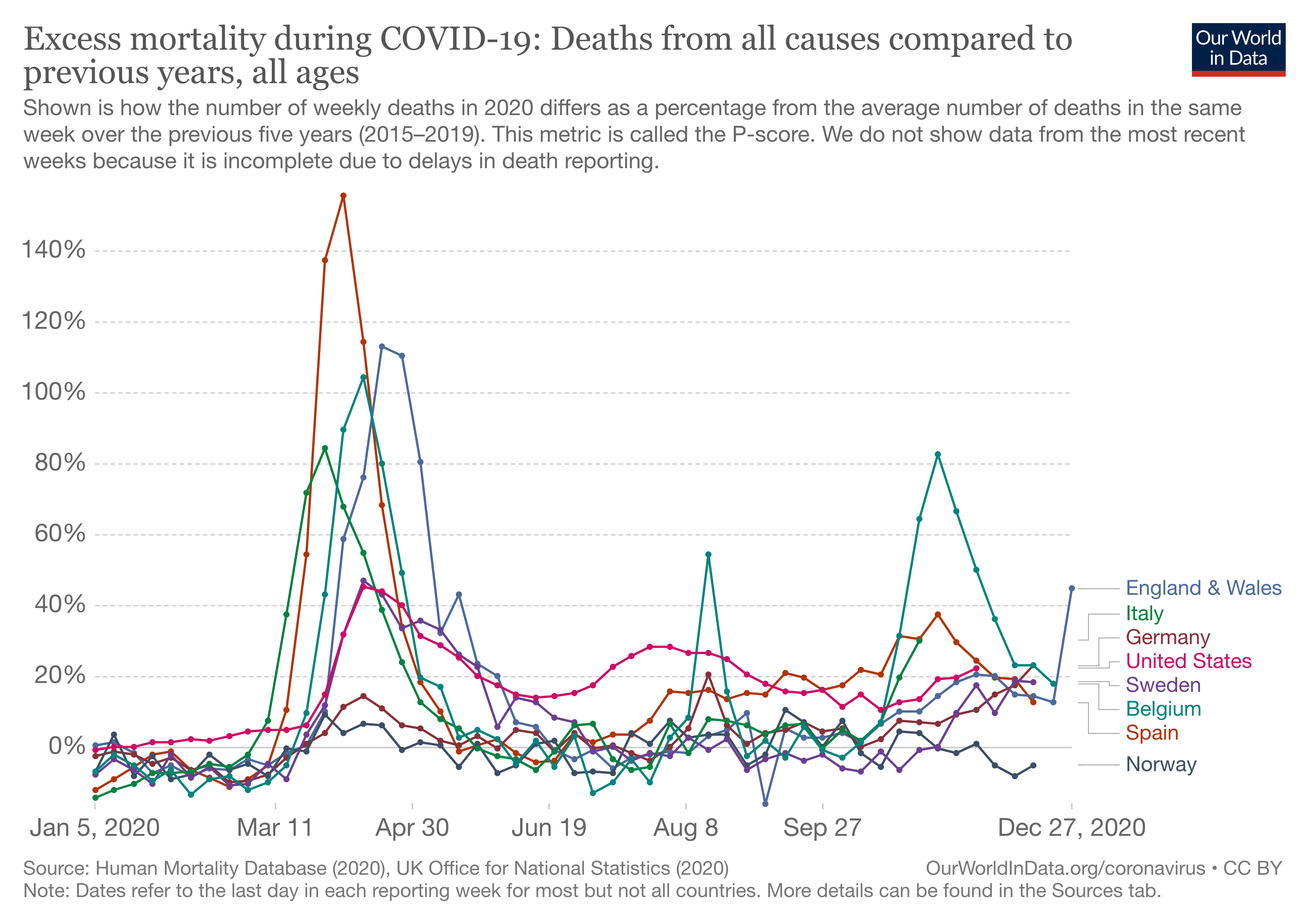 Figure 1. Excess mortality in selected countries since January 2020 to December 2020

Given the big peaks of the USA in the first wave and the England and Wales in the second wave, we’ve looked in more depth at these data.

Firstly, you’ll see that in England and Wales (Fig. 2) there has been a higher total number of deaths than at any time since 1971 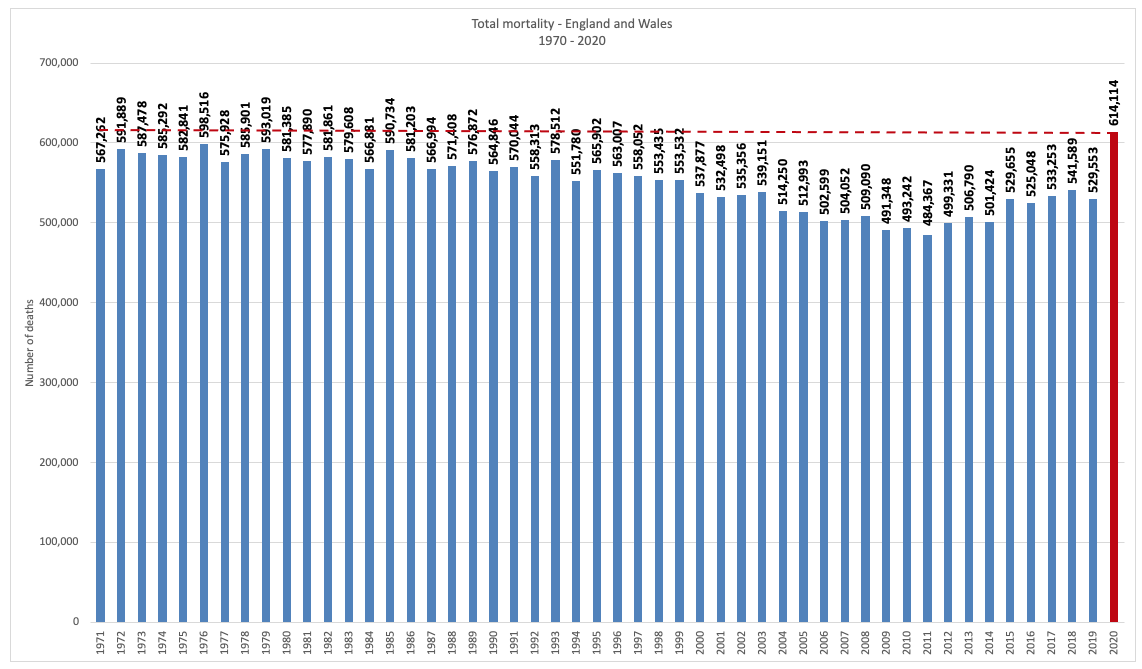 However, the population has grown during this time. So it makes more sense to look at mortality per 100,000 of population. We look at this in Fig. 3. Here you’ll notice something very different to that which is being communicated in the mainstream media. If we look at the same period (1971 – 2020), apart from the dip in mortality per 100,000 population we’ve seen since 2003, the mortality in 2020 was lower than previous years. It also wasn’t as exceptional as many politicians or media commentators would have you believe. 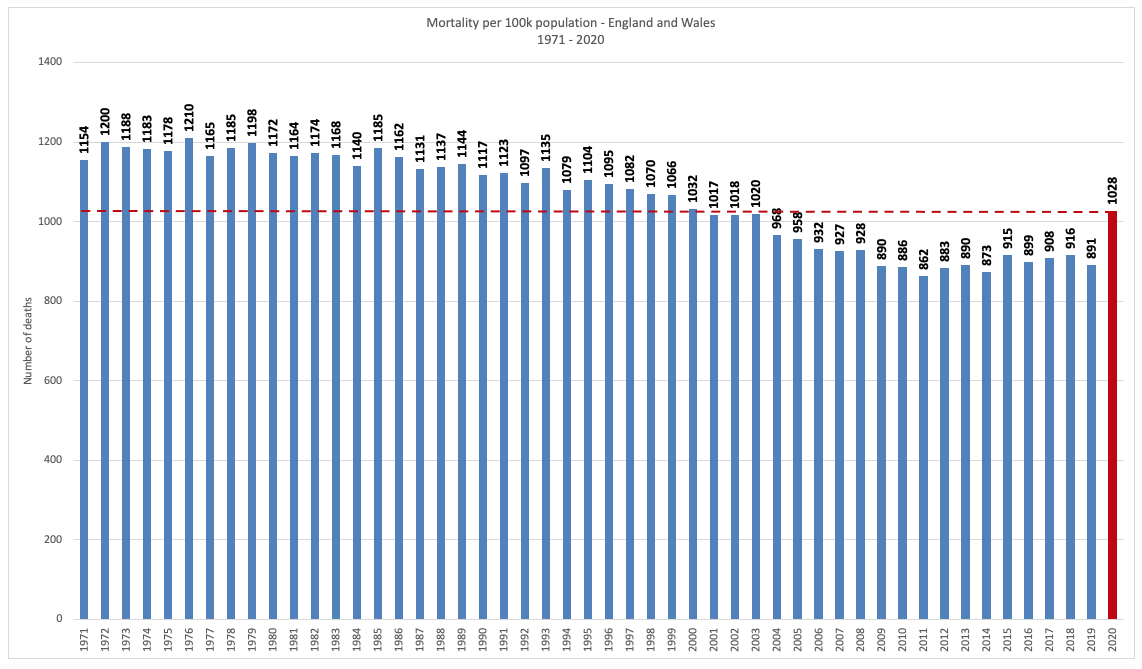 In the next Figure (Fig. 4) we look at the same official data for England and Wales, but we go back further in history and superimpose some of the momentous events like WW2 and pandemics dating back to the Spanish Flu of 1918-19. In that light, the spike of deaths linked to the Covid-19 pandemic of 2020-21 (at least in 2020) looks on par with some of the biggest disasters of the last 120 years. 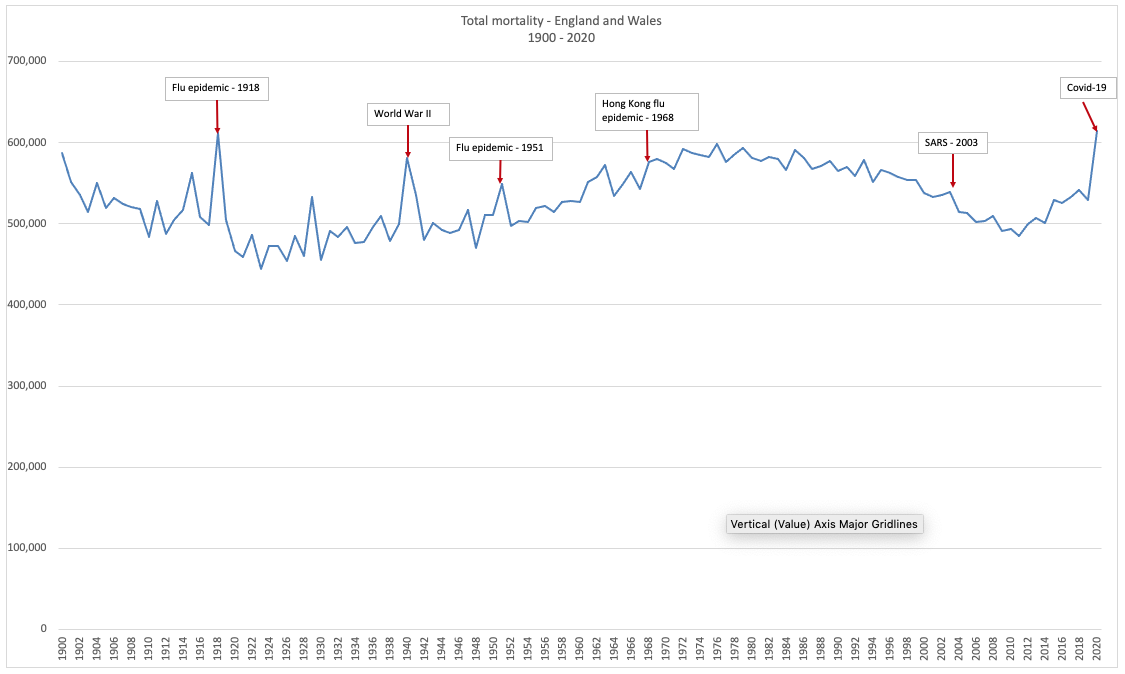 It’s only when we factor out the increase in population over that time and observe the same data per 100,000 head of population that we can get a more realistic perspective on our current predicament (Fig 5). As you’ll see, the purported ‘epic’ proportions of our current circumstances don’t look anything like so bad.

The worst part of it, as we continue on our current journey, it will not be possible to apportion deaths only to the virus. Mortality linked to increasing incidences of depression, lack of opportunity, suicide, domestic violence, unemployment, social isolation, and all the other factors linked to the policies that have been implemented by our governments, will come into play. 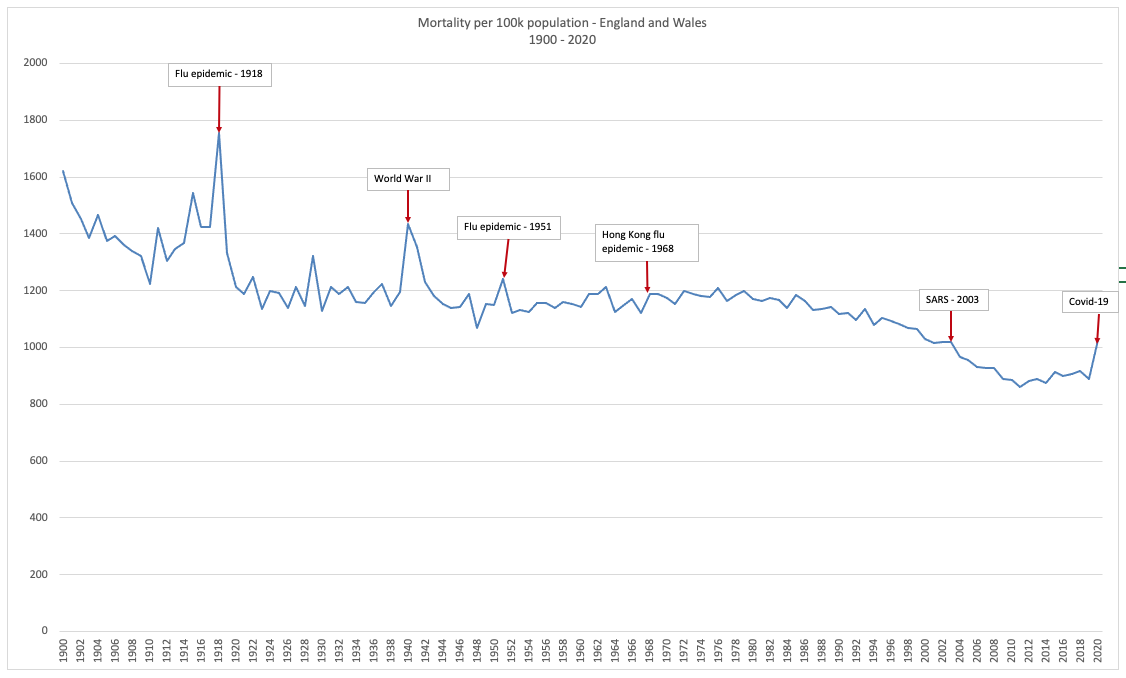 On the other side of the pond

If we now look at the USA in the same way, the picture is somewhat different. In terms of total mortality, you see a similar picture with 2020 having the highest recorded mortality since 1979 (Fig 6). 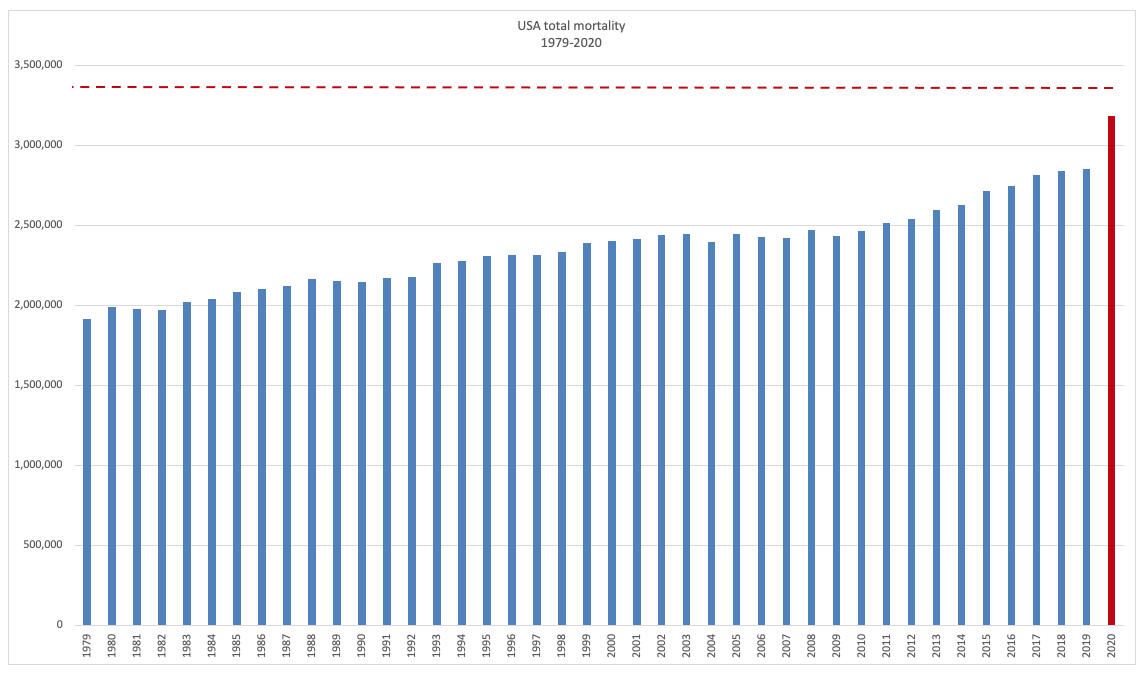 The big difference comes when we look at the mortality per 100,000 population (Fig. 7). Here, there is no getting away from the fact that 2020 in the USA is a very bad year for death – the worst since 1979. More to the point, it’s a trend of increasing mortality. 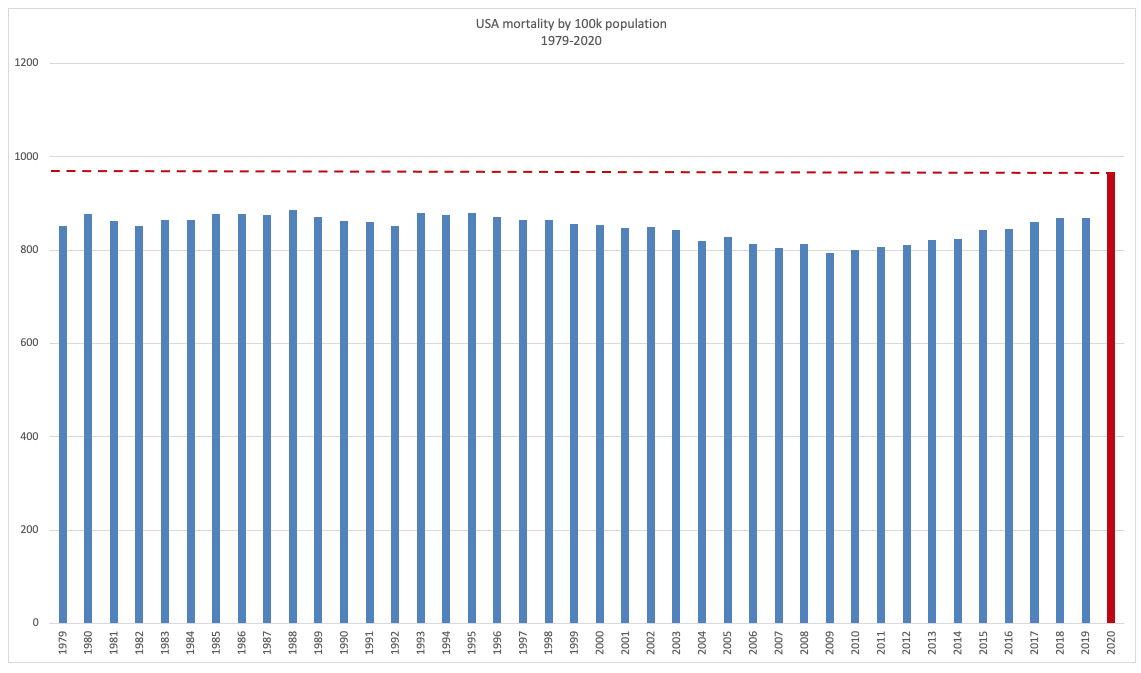 When you look at excess mortality (Fig. 8), we are again remind of the unfortunate picture faced by the US – it has faced excess mortality since the first wave hit in New York, then in the southern states, and subsequently worked its way across the country, the impact heightening as we move into winter and see covid-related deaths conflated with flu and pneumonia.

What might be the drivers of this unfortunate situation? We're all tossed to looking for a culprit, the smoking gun, and don't spend enough time looking at ourselves. It's easier to blame the bullet from someone else's gun the it is the vulnerability of our own flesh.

Clearly mortality is multi-factorial, so the additional deaths cannot be apportioned only to the effect of one virus. It would be reasonable to theorise that the increasing levels of overweight and metabolic disease among the US population — and other 'victims' of the standard American diet coupled with sedentary lifestyles — are underlying drivers. So when a virus came along that was able to exploit unhealthy people – it had a field day, or should we say, a field year (at least).

On top of that, you have the additional sickness and accelerated death of those whose needs are no longer adequately served by the restricted existence and lost opportunities forced upon us by government policies. As the recently released UK Recovery report shows, the indirect effects of lockdowns, social isolation and related measures are dire. Their effects, such as the inequalities they create in education, could last a lifetime.

With the perennial focus on disease as opposed to health and resilience, society fails to see what many Americans and Europeans are capable of doing through self-care and enhancing their in-built capacity for resilience. Educating people who have yet to discover the wonders of natural health should be the focus of us all in these difficult times. It's becoming increasingly that governments will never participate in this process such is their linkage with corporations that are so ready to exploit the populace at large.

As the virus becomes more ubiquitous, it will be ever easier to apportion deaths to SARS-CoV-2. The focus on case rates will allow the pandemic to exist to eternity as low prevalence increases the rate of false positives in PCR and other molecular tests.

We need to get some perspective on what’s really going on.

We hope this article and these graphs – all created by us at ANH-Intl using official data do just that: give you much needed perspective that the mainstream media and politicians are not currently affording the public.

>>> A crash course in resilience