Home News Which hurts us more: virus or governments?

In his latest video coronacast, Rob Verkerk explains, using the latest evidence, why the governments' medicine has caused more harm than the virus itself

It’s impossible to doubt that our species is amidst a health crisis. As it turns out, so are many other species as we propel starship Earth ever deeper into what is undoubtedly our planet’s sixth mass extinction.

The question more and more people are asking themselves is: how much of our 2020 health crisis, that looks set to continue into 2021, is caused by the SARS-CoV-2 virus – and how much is caused by the way we – and especially our governments – have reacted to the virus? This short video makes the case that it’s our reaction to the virus that’s already caused, and is set to cause in the future, by far the greatest and longest-lasting negative impacts.

Let’s now break down how we get to this view.

There are two main ways a disease can seriously impact our health, the function of society and economies, and therefore the all-important socioeconomic determinants of health. One is by a lot of people getting very sick, not being able to work, and dying prematurely. The other is by overburdening our health care services.

On both counts – the latest data shows us that, in contrast to what the mainstream media and politicians would have us believe, Covid-19 is far from the most dangerous threat to health.

Putting some perspective on it, 6.8 million children under the age of 5 have already died this year.

In terms of deaths – there is now broad agreement that owing to different ways in which deaths have been recorded in relation to covid-19, the most reliable way of looking at covid’s contribution is via excess mortality – typically the number of additional deaths that have occurred in a given week or month as compared against the same time over the previous 5 years. Because we’re now well and truly over the first wave, we shouldn’t be making decisions based on what happened historically during the first wave. The virus has mutated over 200 times, more and more people have already been exposed to it so some degree of immunity has already been achieved. We must look instead at the present, as well as at trends going forwards.

Even in the USA, that has been one of the hardest hit countries, excess mortality never rose more than 50% at the peak of the first wave in the north, and didn’t exceed 30% in the south. Excess mortality in the UK doubled largely because not enough was done to protect the vulnerable in care homes. Sweden, which was put in the naughty corner for its light and voluntary lockdown approach, now seems to be enjoying the double benefit of an economy that’s barely missed a beat and a population that’s enjoying negative excess mortality – in other words fewer people have been dying than was the case in the pre-covid era. 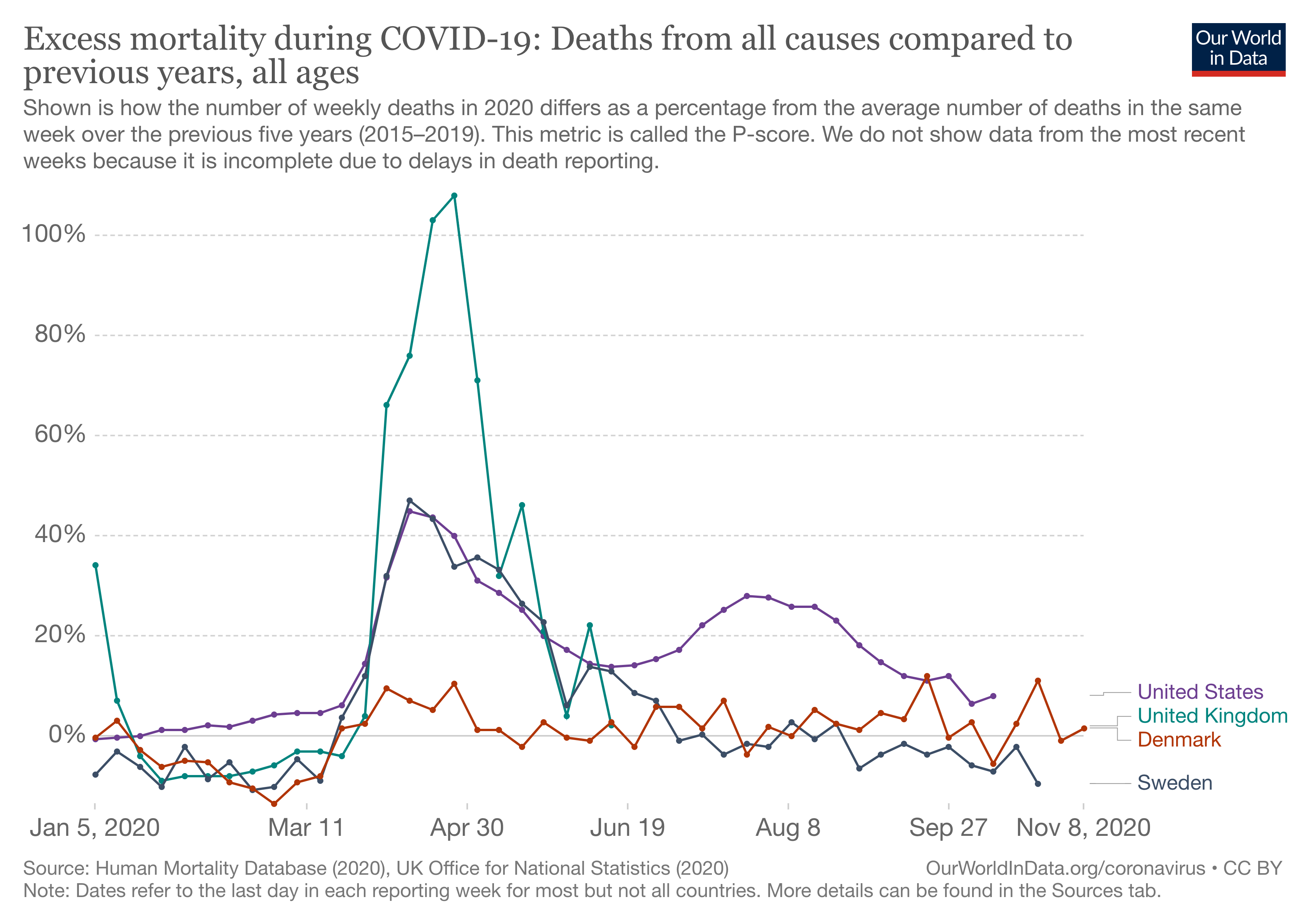 Source: Our World in Data

The long and short of this is that hospitals are overrun in a few places in the northern hemisphere – and these get a lot of publicity. But they’re not in most places. What the mainstream media doesn’t like to tell us is this is the typical pattern in other years at this time of year. The greater pressures of respiratory diseases and cold weather have for many years threatened over-burdened health care systems during the winter months.

As you can see here looking at data from the UK Intensive Care National Audit & Research Centre – ICNARC – the tan line here shows the number of critically ill patients with confirmed Covid-19 is increasing, but is nothing like the numbers in April, and the confirmation of Covid doesn’t mean that SARS-CoV-2 is the cause of the primary health concern for which patients have been admitted to critical care. 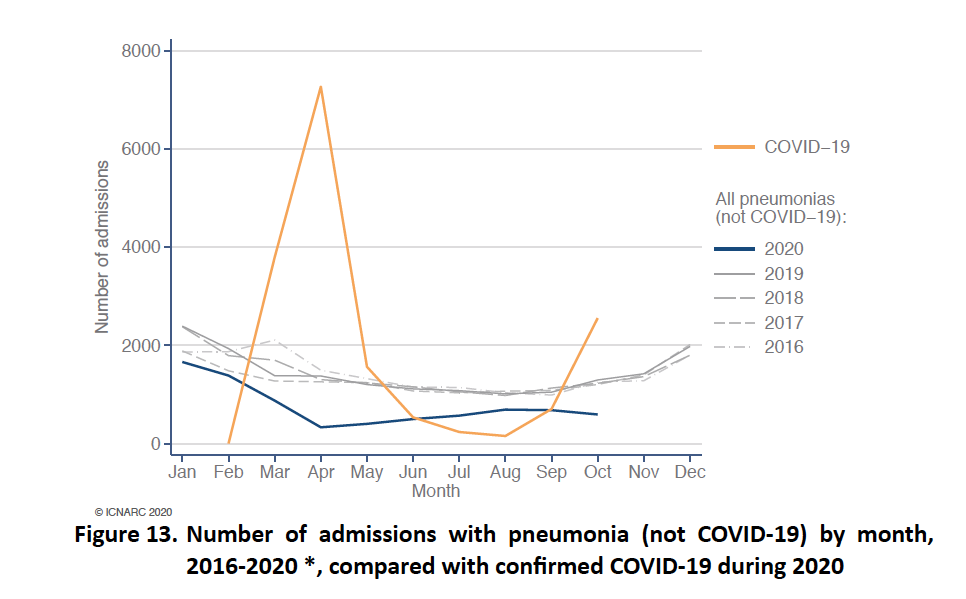 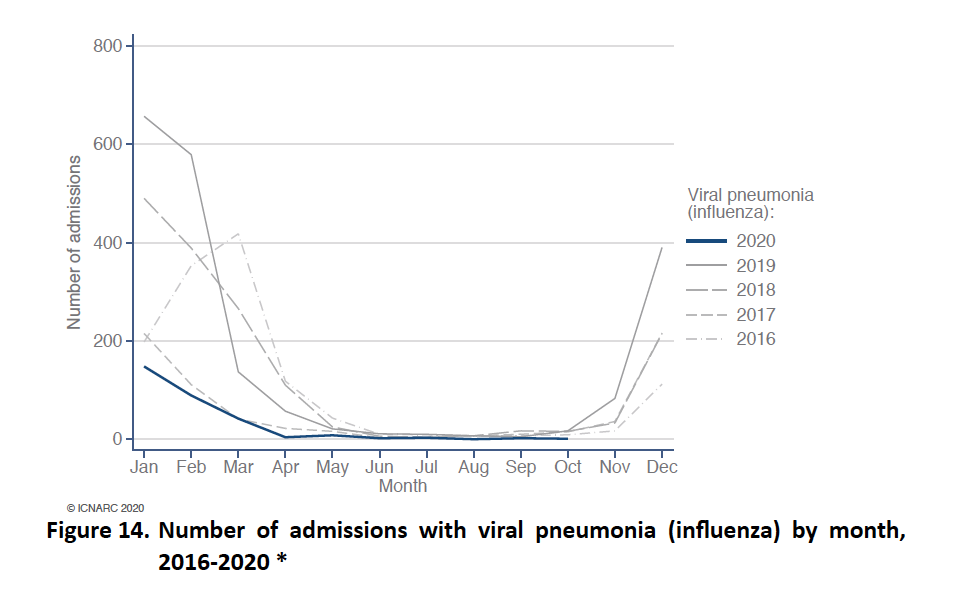 But balanced against that – other non-covid pneumonias – notably caused by flu – are lower. The net burden is therefore pretty much normal for the time of year.

We’re starting to see the publication of more and more reports that are pointing in one direction – that most of the damage to health, society and economies are the result of government policies, not the virus itself. These policies for the first time in history removed people’s ability to manage their risk of infection themselves, in the process causing catastrophic impacts on livelihoods, businesses and economies – the very things most people rely on to stay afloat.

It’s also the very source of damage that Sweden chose to avoid, and its economy has fared better than almost any other in the Western world. What’s more, the acquired immunity of its population seems to be protecting Sweden’s population from a second wave of infection.

The travesty of over-testing

Much of the hysteria about Covid is being driven by focusing attention on cases measured by PCR tests, not cases of disease. There’s an ever growing literature of publications that is making clear that most commercial antigen tests using Reverse Transcriptase RT PCR looking for SARS-CoV-2 relies on a cycle threshold or CT that is in excess of 35. The RT part means the RNA in this or other viruses is converted into a matching sequence of DNA which is then amplified, doubled, 35 or more times. One study by Jared Bullard and colleagues from the University of Manitoba in Canada published in the Journal of Clinical Infectious Diseases found very little infectivity in patients who tested positive with CT values greater than 24.

Another study published in the same journal, led by Bernard La Scola from the IHU in Marseille, France, found that for CT values of 35 or more, only 3% of cultures were infective.

Yet most commercial tests can run up to 40 to 45 CT and those who receive positive test results are not told the CT value that triggered the positive result.

This is crucial especially in non-symptomatic, presymptomatic or asymptomatic individuals with either no or likely low viral loads. A positive result with a high CT value will be detecting viral fragments or bits of closely related virus like the common cold that have no ability to infect another person.

Adding to that are the problems of very high rates of false positives when prevalence is low – that’s linked to Bayes’ theorem that we discussed in a previous video. Incredibly – given there’s a Wild West of mass testing going on out there, there’s still no true gold standard by which to compare PCR tests. Bottom line: mass testing of the general population is very unreliable and it’s bordering on the fringe of scientific lunacy to base enforced isolation, travel bans, visits to sports or entertainment events or government mandated lockdowns on a flawed mass testing regime. But that’s what governments are doing anyway.

When times are tough, it’s more important than ever we’re solution-based. Here’s out top 3 solutions.

Protect our rights and freedoms, and the rule of law

Trying to hide away from a virus, the threat of which to the global population has been greatly exaggerated, crashing economies in an effort to escape a single virus, and removing people’s rights and freedoms as a means of trying to control the spread of this one virus, is looking ever more difficult to justify scientifically, socially and economically. Let’s stop the politicians from trying to play scientists and then trying to justify their decisions politically. While the science will in time be so overwhelming and inescapable, right now the surest and quickest way of trying to halt the madness is using the accumulating evidence in courts of law to upend the irrational policies being enforced on hundreds of millions of people around the world. Let’s do this before the next new virus appears.  This particular coronavirus, whether deliberately or unintentionally, has been used as the doorway for global governance – at huge cost to citizens around the world.

Secondly, let’s all work on developing, as much as we can, the protective effect of wellbeing, something that’s been known for years. People who suffer more severe consequences of covid-disease generally suffer from underling conditions or are older. That means the allostatic load on their systems is greater, so they have less capacity available for their immune systems to overcome the virus. They may also have insufficient resources for their immune systems to work – and most of these resources come from our diets and simple vitamins like vitamins D, C, A and zinc. In a word, the people who suffer most are those who’re less resilient and for most of us, there’s a lot that we can do to improve our resilience.

Thirdly, let’s share what we know to be factual and true – via whatever medium or platform you find is still working – because there’s never been a time in the so-called once-free-world when so much of the world’s media was attempting to control a given narrative while also trying to root out dissenting voices.

Our freedom of expression and freedom of thought has long been one of the best things about the human race.

Let’s not let this right be stripped from us for the sake of the few that seek to benefit from a widely misunderstood virus.

So a big thank you from us at the ANH team for all your effort in sharing this video that we know would be censored on YouTube. You’ll find plenty more on the videos section accessible from the home page of our website. Thank you.