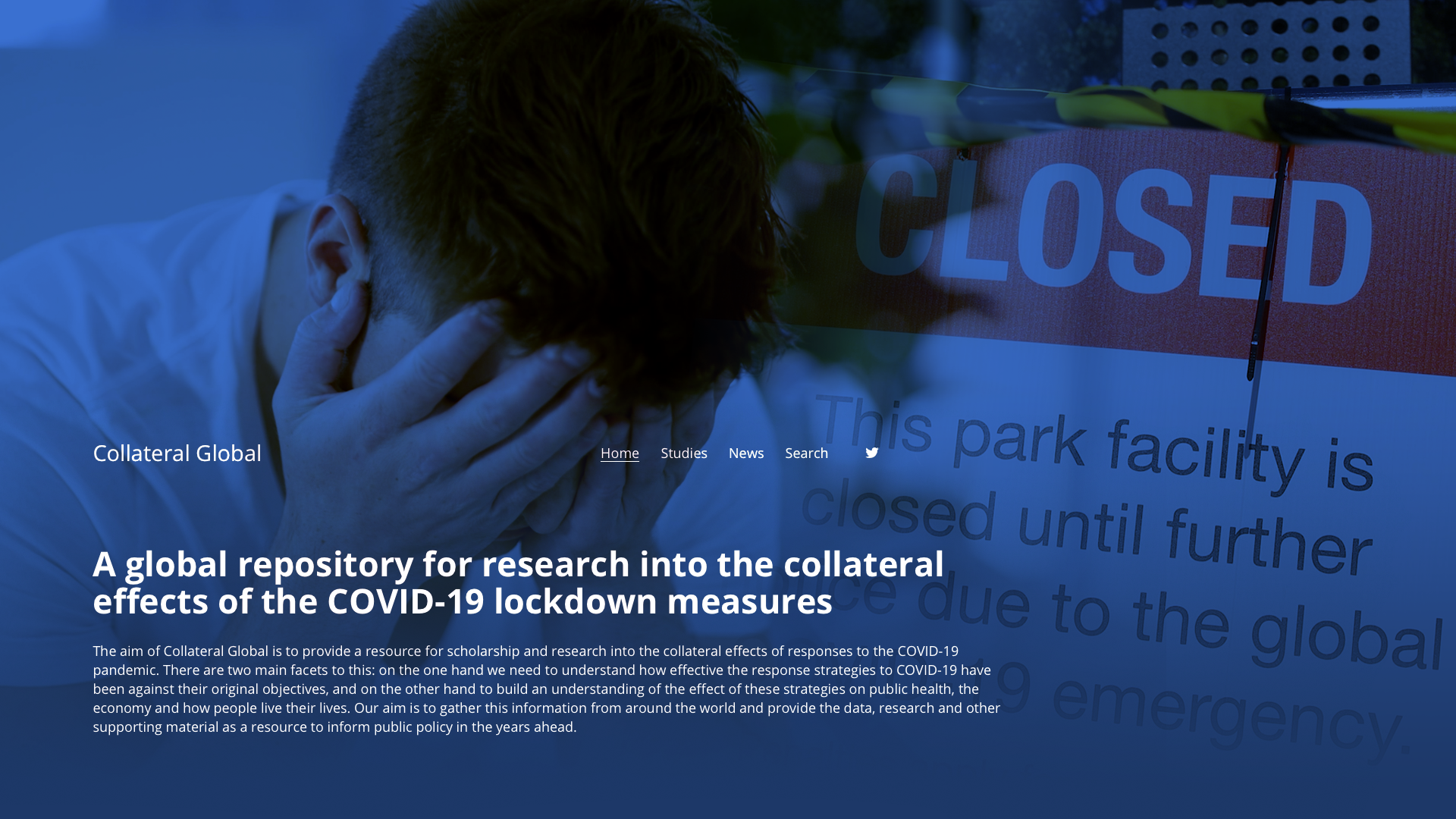 While some were gratified by the change in lifestyle that the first round of lockdowns brought, it’s becoming apparent that lockdowns can have a devastating downside. More and more information is emerging showing they can destroy lives, livelihoods and economies, while robbing people of their health and wellbeing. Increasing numbers of scientists and health professionals are voicing their concerns over the continued use of lockdowns to ‘control’ an uncontrollable virus that has likely already become endemic. But their calls are falling on deaf ears as governments globally once again resort to lockdowns to counter spiralling ‘case’ rates seemingly regardless of the indirect collateral damage caused by lockdowns.

Long-term, it’s evidence – especially robust evidence – that will hold sway. That’s the reasoning behind an initiative at CollateralGlobal.org that’s being established as “a global repository for research into the collateral effects of the COVID-19 lockdown measures.” It was set up on 4 November with the help of UK businessman, Luke Johnson (no relative of the UK’s prime minister).

The entity hosting the website is a UK based non-profit and it has none other than the three, world-leading public health scientists behind the Great Barrington Declaration on its supervisory board, namely Dr Jay Bhattacharya (professor of medicine, Stanford Institute for Economic Policy Research), Dr Sunetra Gupta (professor of theoretical epidemiology, University of Oxford) and Dr Martin Kulldorff (professor of medicine, Harvard Medical School). They are accompanied by outspoken, evidence-based lockdown skeptic, Dr Carl Heneghan, professor of evidence based medicine, University of Oxford).

The site has initially focused on the UK, but will be expanding to include other countries in the coming weeks. Writing in The Times, Luke Johnson accused the UK government and its “expert” advisors of “suffering from a number of failings linked to cognitive biases in their approach to Covid-19 and lockdowns”.

Given that the heavily funded, pro-lockdown scientists responded to the Great Barrington Declaration with the John Snow Memorandum, should we expect to see copy-catting with the release of a website containing a repository of evidence for the benefits of lockdown? Drs Bhattacharya, Gupta, Heneghan and Gupta have been predictably smart: the John Snow lobby will struggle given the paucity of data. They’re also well behind on signatures. So if you hear anyone in government telling you lockdown decisions are being based on science, you’ll know they’re either lying or they’re ignorant.

On balance, the ‘no lockdowns’ have it

What’s emerging is an interesting balance of evidence: The evidence for lockdown benefit continues to be wafer-thin, with the harms caused by lockdowns increasingly outweighing any perceived or measured benefits. As we showed last week, countries that have locked down hardest have among the highest covid-associated mortalities and there is no clear association with outcomes and lockdown severity or absence.

Even Dr David Nabarro from the World Health Organization has gone on record to say that governments should only ever use lockdown as a last resort.

The blindness of groupthink

UK Chancellor Rishi Sunak warned in October of an impending ‘economic emergency’ if the UK Government was to go ahead with a second lockdown. His warning went unheeded and a second lockdown was initiated without any impact assessment. It seems when the strings of the global governance movement including UN agencies, the World Economic Forum, the International Monetary Fund, and others have decided on a particular course of action, obedient governments choose to follow suit, regardless. Groupthink becomes the driver, not science or the welfare of the world’s populations.

In the US, 600 doctors sent a letter to Donald Trump branding lockdowns “a mass casualty incident” with “exponentially growing health consequences”.

What is the collateral damage of lockdown?

Following is a summary of the known evidence of lockdowns, based on established harms of lockdown measures, reflected by the evidence documented on the collateralglobal.org website. The Figure complements the ‘Big 52’ we identified in an article on ‘covid myopia’ released 2 weeks back, that includes 52 risk factors for severe covid-19 disease, many modifiable, widely ignored by governments and health authorities. 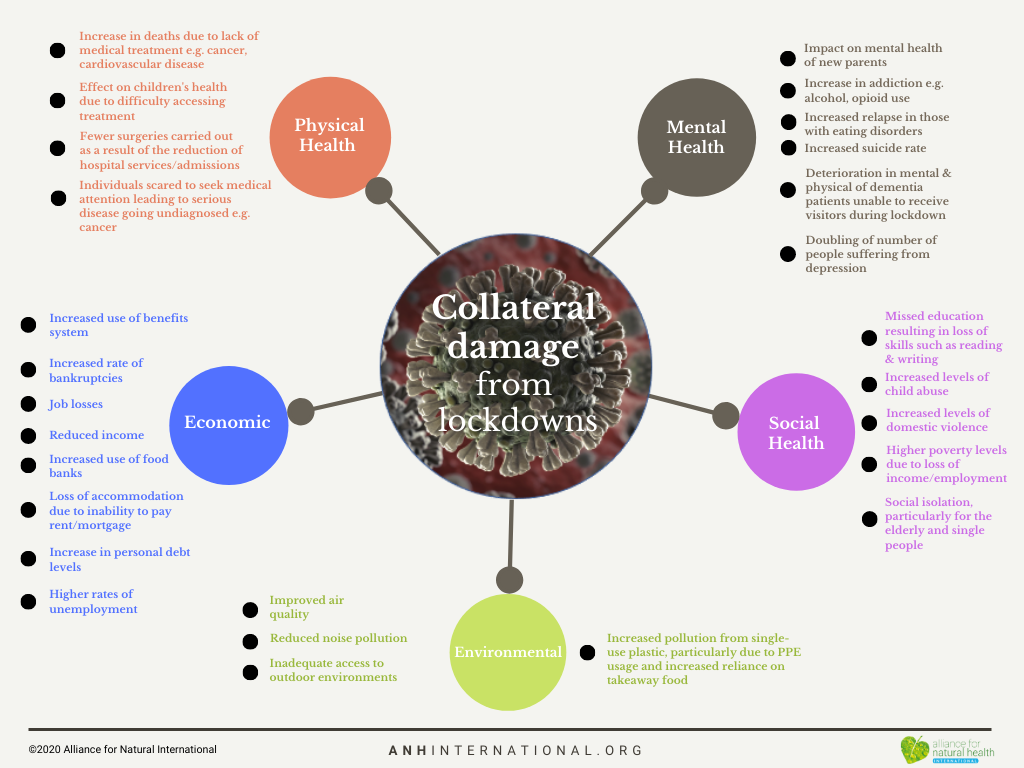 Figure. The collateral damage from lockdowns. Based on the expanding evidence repository at collateralglobal.org

Note: evidence marked with an asterisk below can be found at www.collateralglobal.org. Other evidence is from variable sources including media reports and has sometimes yet to find its way into peer reviewed journals.

It’s not only scientific factions that are polarised, so are political ones – that polarisation being reflected in society.

In the US, President-elect Biden has pledged to rebuild the relationship with the WHO, go for a national mask mandate, and has mooted the possibility of nationwide lockdowns. Where’s the science, Mr Biden?

It’s no different this side of the pond. In the UK, health secretary Matt Hancock vows “to inject hope into the arms of millions this winter”, although it’s reassuring he’ll have to face a growing army of Tory rebels who’ve launched an anti-lockdown campaign group.

If there can be one generalised conclusion, it’s that politics trumps science (pun noted).

Please sign up for our FREE ANH-Intl Heartbeat newsletter at the base of our homepage for weekly, information-packed, potentially life-changing information