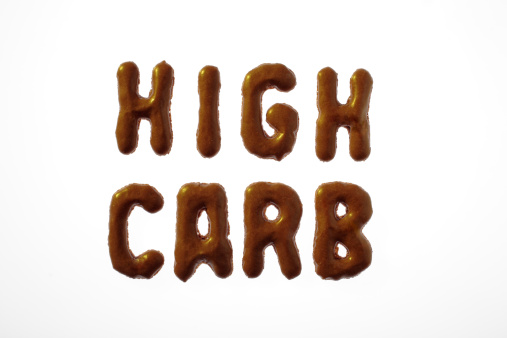 We show why we should interpret the findings of this short-term mouse study with extreme caution and continue with the recommendations given in ANH&rsquo;s Food4Health plate

On the back of a study published last week in Cell Reports led by Prof Stephen Simpson at Sydney University, various media, such as the Sydney Morning Herald and Medical News Today have used the opportunity to lambast so-called carb-free or low carb diets. This – excuse the pun – feeds directly into a growing, media-supported movement, against low-carb aficionados, epitomised by a recent article in the UK’s Daily Mail. 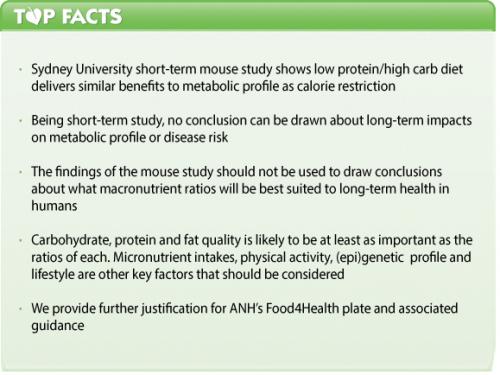 Is the low-carb attack justified?

There are a few key points that emerge from the Cell Reports study. These are:

Based on the findings, we consider that media hype using this study to push people away from low carbohydrate diets and back to high carb ones is not justified. Worse, it could serve to push many people back to the low fat/ high simple carb eating habits that have been a major driver of the current type 2 diabetes and obesity epidemic.

What should we take away from this study?

Should you change the way you eat?

There is nothing in the Cell Reports study that we believe should alter the guidelines we have given as part of the Food4Health Plate that we publicised earlier this year.

Critical to any interpretation of what high or low carbs means is the quality of the carbohydrates, and of course, quality applies equally to proteins and fats. There is a real danger that the study could be misinterpreted so as to give a green light to go all-out consumption of simple, starchy carbs and sugars. It is widely recognised that this over-consumption of high glycaemic carbs is at the route of today’s type 2 diabetes and obesity epidemic, alongside insufficient physical activity.

Also, reducing or removing gluten-containing grains, or even all grains from the diet, doesn’t mean that carbohydrate intake will be low. The Food4Health plate, which recommends veggies at about 40% by volume, and fruits at 10% volume, contributes to around 40% of all energy from carbs, even though gluten-free grains comprise only 10% of the plate. That’s because vegetables and fruits are themselves largely carbohydrate – as well as being fantastic delivery systems for phytonutrients, some of which are crucial modulators of metabolic, endocrine and immune function.

Some dieticians argue that removal of entire food groups is either difficult or dangerous, and that high carbohydrate diets are ideal, especially if carbohydrates are derived from wholegrains.

Over-processing is a problem for sure, as it removes valuable fibre and micronutrients. But a combination of over-cooking and over-processing can turn a food that is labelled as wholegrain into one that has a glycaemic index higher than white rice or pasta! To understand this better, we strongly recommend you use the GI Calculator  developed by Dr Jennie Brand-Miller’s Human Nutrition Unit, School of Molecular Bioscience at University of Sydney to inform your choice of low glycaemic carbs.

The Food4Health plate proposes gluten-free grains and carbohydrate sources only. This is because a large sector of the population, possibly 50% or more, have some degree of sensitivity to wheat or gluten, some of which may not have clinical manifestations for years.

Finally, don’t forget that factors such as meal frequency and physical activity (type, duration and frequency) are at least as important as macronutrient and micronutrient composition in affecting your metabolism, vigour and overall health. Because we are all different — phenotypically, genetically and epigenetically — and we have different lifestyles, there isn’t going to be one plan that will work for all people. But simple and generalised guidelines, such as leaving at least 5 hours between meals, avoiding snacking, and exercising at least an hour a day, can go a long way towards establishing metabolic equilibrium in the majority of people.