Vitamin D - Prevention rather than cure

Are you getting enough? Vitamin D that is!

It’s August and if you’re one of the hordes in the mass exodus to sunnier climes this summer, you’re likely lying on a lounger topping up your vitamin D levels as we write. Alas, those of us who opted for a ‘staycation’ in the UK, are now in need of some vitamin D supplementation given the sun’s ‘now you see it, now you don’t’ appearance. It’s not all about the tan either. The sun is an integral part of our health, vitality and immune resilience because it gives us vitamin D, which, amongst a host of other health benefits, can also modulate our innate and adaptive immune responses. As such, deficiency in vitamin D is associated with an increased risk of developing autoimmune diseases, as well as an increased susceptibility to infection and chronic disease, let alone denying us its myriad health benefits.

Summer precedes autumn, which heralds winter, which in turn means a greater vulnerability during the cough, cold and flu season. Instead of visiting the local pharmacy and reaching for over-the-counter medicines if you succumb, consider using this time to bolster your immune system and hone your innate resilience. Be mindful that the so-called ‘flu season’ may in fact be largely down to a serious deficiency in vitamin D from lack of exposure to sunlight during a grey and rainy summer or long, dark winter days.

Circulating blood levels of Vitamin D are naturally maintained by exposure of the skin to sunlight. It was a robust evolutionary mechanism designed to ensure availability. Your body can produce 10,000 to 25,000 IU (250 – 625mcg) of vitamin D in just a little under the time it takes for your skin to begin to burn, if enough of your skin is exposed. This means that you should have some fear-free, SPF-free time in the sun before you lather up and ‘slip, slap, slop’ as the slogan in Australia goes. Vitamin D blood levels have plummeted globally and 40-75% of the world’s population are now estimated to be vitamin D deficient. Although worse in the northern hemisphere, this is also due to the use of high-SPF sunscreens, increasingly indoor lifestyles, widespread media warnings about skin cancer and general fear of the sun. Many have mistakenly been led to believe that it is exposure to the sun itself, rather than the act of getting sunburned, that causes skin cancer. Without the sun, life on earth would cease to exist.

Deficiency and disease or health and wellbeing

Along with lowered immunity, the evidence base shows that people with low serum vitamin D (25-hydroxyvitamin D) levels, less than 75 nmol/L (30 ng/ml), are more at risk of developing a plethora of health problems, such as:

Vitamin D was one of the first nutrients to which our cells were exposed. As such, we’re very dependent on it for our health and wellbeing with adequate levels being in the region of 100-150nmol/L (40-60 ng/ml). Vitamin D is essential to: 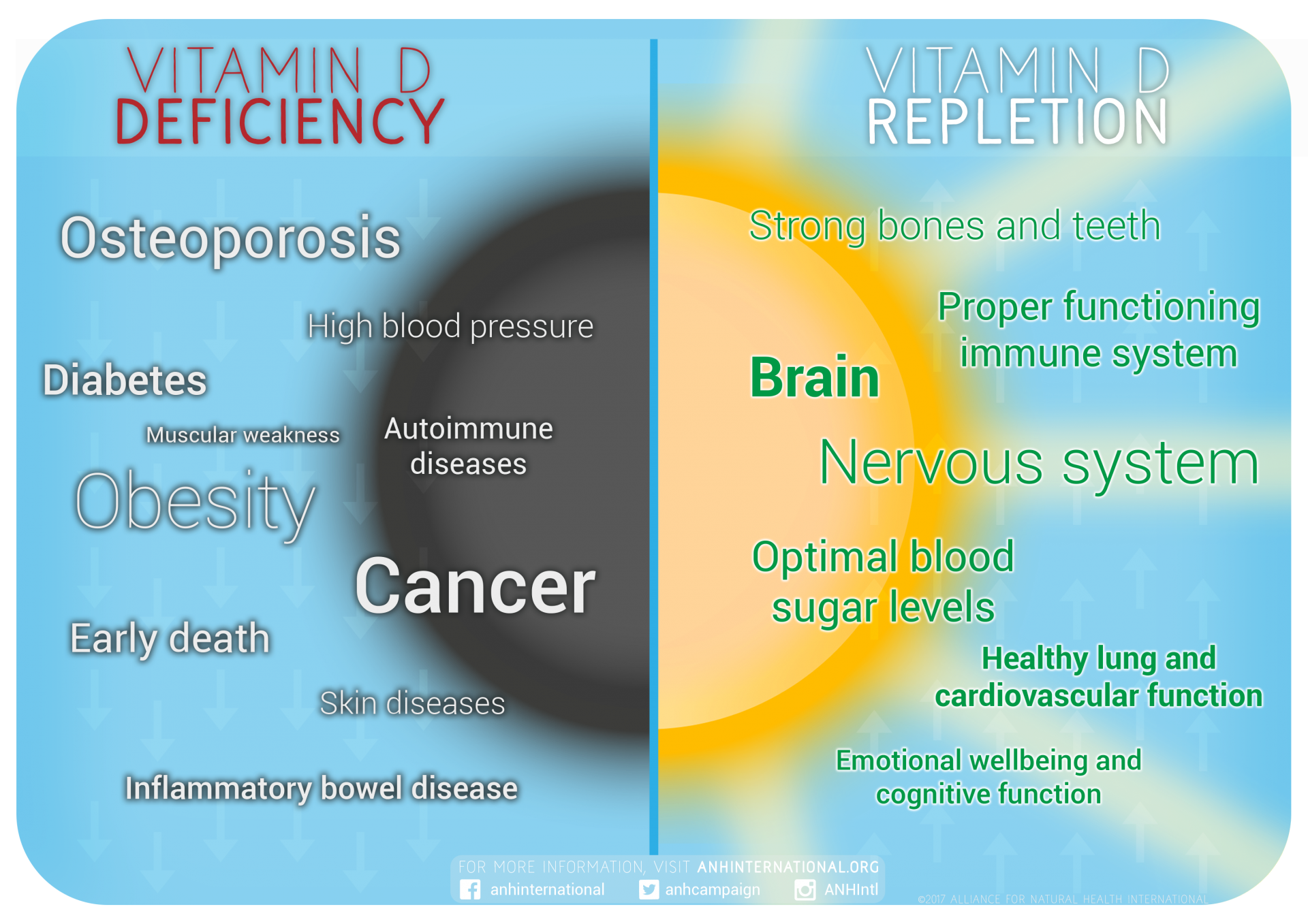 (The above image is a downloadable PDF)

People vary hugely in their vitamin D requirements and there’s no clear correlation between circulating blood serum levels and intake. It’s uptake in the body, rather than intake that matters. The appropriate intake of vitamin D required to effect significant disease reduction depends on the individual’s age, race, lifestyle, latitude of residence and genetic make-up. Gene copying errors through single nucleotide polymorphisms (SNPs) can render vitamin D receptors less sensitive in some people, requiring a higher intake than for others. The only way to determine the level of circulating vitamin D you have is through a simple blood test from your GP or healthcare professional. From there you can assess if your sun habits and exposure or supplementation are adequate for your requirements and institute ongoing monitoring.

Foods such as fish, eggs, mushrooms, or even fortified milk or cereals – while containing some vitamin D – do not generally provide enough to optimise serum levels of circulating 25-hydroxyvitamin D to exceed the minimum 75 nmol/L (30 ng/mL) level. Most fortified foods use vitamin D2 (ergocalciferol, as made by plants) rather than vitamin D3 (cholecalciferol, as made by our bodies in response to sun exposure). Studies show that vitamin D3 is far more important for our health and should be used in preference.

Maintaining an elevated serum level of vitamin D on its own, in isolation from other nutrients and healthy lifestyle factors, is not in itself a ‘magic bullet’. Spoiler alert… magic bullets don’t really exist! Nature, and the human body, are a complex network of interwoven systems that work in synergy with one another. That’s why broad spectrum diet and lifestyle interventions — which include exposure to the sun, or use of vitamin D3 supplementation — are such powerful healers.

Read the guidelines from the Vitamin D Council. The brief advice is as follows: