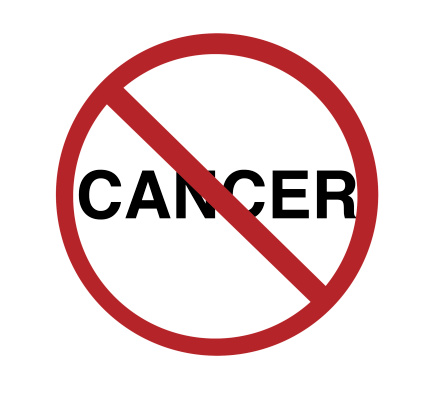 The fourth edition of the European Code Against Cancer was launched last week. The guidance sets out 12 “science-based” recommendations for cancer prevention within the EU. The guidance represents a European Commission initiative and is coordinated by the International Agency for Research on Cancer (IARC) and co-financed by the EC’s Health Programme. The IARC is so confident of the guidance, it asserts confidently: "It has been estimated that almost half of all deaths due to cancer in Europe could be avoided if everyone followed the recommendations".

Below we take a look at amendments to the code since its last version in 2003, and take the opportunity of highlighting what we do and don’t like about it – based on our current state of understanding of the surrounding science. 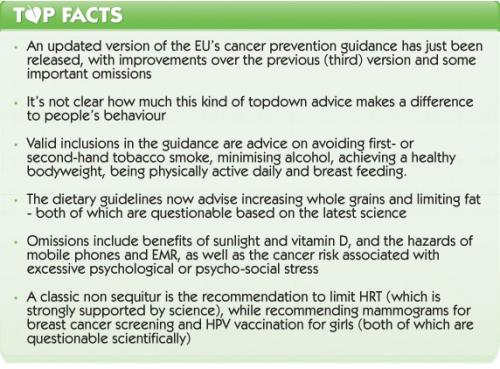 What’s new in this 4th version of the Code Against Cancer?

The 4th version of the guidance follows a similar format to the 3rd version, but with a few key differences.

On diet, there’s the usual essential recommendation to eat plenty of vegetables and fruit, though the ‘5-a–day’ recommendation’s been dropped. But we’re now being advised to eat plenty of whole grains and pulses too, something we believe isn’t necessarily justified by the science (as you’ll see below). Advice to limit intake of foods containing fats from animal sources has been removed based on recent evidence, and in its place we see the recommendation to “limit high-calorie foods (foods high in sugar or fat) and avoid sugary drinks”. That’s of course spot on for sugars, but we don’t agree with the continued demonisation of fats (see also below). Lastly, on diet, we now see sound advice to "avoid processed meat; limit red meat and foods high in salt”.  Erm – we’re with them on the processed meat front, but on the rest – and sorry to cop out on this – it really depends.

New, and worthwhile additions to the code, include advice to limit time spent sitting, avoidance of sunbeds, guidance about radon in homes, and recommendations to breast feed and – wait for it – limit use of hormone replacement therapy (HRT). Yes, the science is that persuasive, despite thousands of women being put onto HRT as if there were no alternatives and with no warnings from the prescribing doctors that this might increase their cancer risk.

Then, in a seeming twist, and contrary to the available evidence, there’s the disturbing new recommendation for girls to to be given the very controversial Human Papilloma Virus (HPV) vaccine. No mention of the evidence of Merck, Gardasil’s manufacturer, that indicates that for some girls who already have HPV lesions, Gardasil may actually increase the risk of cervical cancer. We were concerned too to see new advice for infants to receive a Hepatitis B vaccine at birth, as in the USA. In the UK this is advised for 'at risk' groups only. There is a long history of concerns over the vaccine increasing the risk for demyelinating disorders of the central or peripheral nervous systems, including multiple sclerosis (MS) and Guillain-Barré syndrome (GBS).

No one will disagree with the recommendations about smoking avoidance, limiting alcohol, healthy bodyweight and physical activity. Perhaps where any disagreement lies is more about what are the most effective ways of dealing with these behaviours. On the activity front, being “moderately active for at least 30 minutes per day” is a step in the right direction, but is perhaps a little too simplistic and doesn’t go far enough. We also concur with the advice about sunburn and sunbeds, but there’s nothing about encouraging people to get exposed to the sun without burning to optimise their circulating levels of vitamin D, something that can be achieved by Caucasians by exposure of 80% of their body area to northern hemisphere, mid-summer sunshine for around 20 minutes. Otherwise, there’s vitamin D3 supplementation. We also have concerns about the application of synthetic sun-screening products (as indeed we do about many other personal care products), some of which contain carcinogenic ingredients.

The guidance about radon in homes, and avoiding hazards in the workplace is important, but the recommendations make no reference to many more common hazards and environmental toxins that most of us face in everyday living, including the insidious and increasingly ubiquitous dangers of mobile phones and electromagnetic radiation, which are unquestionably linked with cancer.

In recommending “plenty of whole grains”, and limiting high fat foods, the guidance fails to reflect current and nutritional science, nor take into account knowledge about how cancer cells are formed and then thrive in some people. Wheat and other cereal grains (and lectins in pulses, nuts and seeds too) play a substantial role in inflammation, both in the gut and beyond, as well as disruption of energy metabolism pathways and the immune system—all of which are precursors for cancer. High carbohydrate diets, notably those low in fats, provide the ideal fuel for cancer cells, leading to respiratory insufficiency and anaerobic (oxygen-free) cellular respiration. This process is known as the ‘Warburg effect’ after Otto Warburg’s discovery of the importance of glycolysis and increased lactate fermentation to the induction of tumours nearly 90 years ago. High carbohydrate diets also reduce cell insulin sensitivity and dysregulate mTOR complex (the nutrient sensing pathway that regulates cell growth and survival) —another common route to cancer. Fasting or caloric restriction can be an efficient means of restoring mTOR balance and good health.

In contrast, a ketogenic diet including relatively large amounts of healthy fats, moderate amounts of healthy, undamaged protein and restricted carbohydrate, provides a fuel primarily supportive of healthy cells. This in turn creates and supports cellular respiration in cells, via the mitochondria, and tends to to avoid switching on oncogenes that then trigger the uncontrolled division of cancer cells as found in tumours and metastases.

Many dietary ingredients reduce inflammation – but when did you hear a major health authority recommending an anti-inflammatory diet? Examples include addition of Omega-3 oils. Too high an Omega 6 to 3 ratio, say more than 6:1 along with consumption of highly processed, industrialised and heat-damaged vegetable oils tend to promote cancer.  Saturated fats are still widely demonised despite knowledge that healthy and nutritionally rich saturated fats, especially those from free-range, organic, grass fed animals are good for us. Other saturated fats, such as the medium-chain triglycerides (MCTs) found in coconut oil, are also beneficial fats. Don’t forget fats provide over twice the energy value compared with an equivalent amount of carbohydrate or protein, that’s why they are increasingly recognized as the macronutrient of choice for energy among elite endurance athletes.

The anti-cancer properties of phytonutrients from non-GMO, organic vegetables and fruit, grown in mineral-rich soil, cannot be over-stressed. Vitamins, minerals e.g. iodine, antioxidants and other nutrients that support immunity and other body systems, are key, as is support for the microbiome. GMOs and other non-organic foods containing residues of the world’s number one herbicide glyphosate, along with other herbicides, pesticides, xenoestrogens and multiple toxins (present in many processed food ingredients), can disrupt gut bacteria, hormones and enzyme systems, organs and body processes that maintain health and keep cancer in check.

Any more for any more?

We question why mammograms are still being recommended for breast cancer screening.  This makes no sense when the Institute of Medicine in the US has acknowledged the hazardous effects of mammogram radiation as a significant factor in the development of cancer and the Cochrane Collaboration has shown mammograms can increase, rather than reduce, mortality from breast cancer. Stress avoidance and transformation might have been a worthwhile addition too, given mounting evidence.

Were concerned that the EU Code Against Cancer may be falling short of its objectives, and of its claim to be able to reduce European cancer deaths by half, if the guidance is adhered to. The guidance, whilst we believe it to be accurate in some respects, suggests a failure to adequately consider important areas of current science, and to fully consider the complexity and multidimensional aspect of cancer.

Concerned about your chemical load?

Let’s remember that governments and health authorities make decisions about risks from individual chemicals in the environment. But in reality we are exposed to many thousands of industrial chemicals every day. So what if you are, on a daily basis, consuming many products, or exposing them to your kids, all of which contain several ingredients that have some question marks over their safety? What if you could find those that were, from the standpoint of current science, entirely free of known toxins, endocrine disruptors or carcinogens?

That’s where a green light from Toxxscan might be just what you’ve been looking for.

We’ve been involved with the development of Toxxscan for  around 2 years now, but this is the first time we’ve seen fit to publicise where we’re at with it. The project is about building a comprehensive database, in turn created by amassing data from numerous disparate but authoritative scientific databases, the likes of which are usually used only be researchers.

The idea is to allow consumers to access these databases at the point of purchase, using a mobile device with purpose-built apps that include the ability to read product bar codes which in turn yield ingredients. After being processed via an algorithm, the apps will inform the consumer if individual products contain chemicals of possible toxicological or carcinogenic concern. The apps wil use algorithms to given the consumer an information friendly idea of any known risks, and will be particularly useful to help consumers discern those products that are clear of risks on the basis of known science.

ANH-Intl has been working with Swedish non-profit Envirohealth Matters and the Italy-based Ramazzini Institute. Ramazzini Institute, you may recall, has been at the forefront of identifying carcinogenic risks in Europe, including from the artificial sweetener aspartame.

You’ll be hearing more about the Toxxscan initiative from us, via our website, our eAlerts and social media. We’ll soon be going live with a request for crowd-funding to help finance the technical support needed to finalise the project. Watch this space.