Home News Blog: Turning the screws on depression and anxiety among today’s youth

Blog: Turning the screws on depression and anxiety among today’s youth

It’s probably not too much of a stretch to say that 2017, for many, set a precedent for being one of the most divisive years in recent memory. Events that have the power to change the course of history were met simultaneously with joy, dismissal or indifference by different sectors of society. With multiple, warring realms at breaking point, the dawn of a ‘Hard Reset’ seems like one of the best options for most of us – and who can blame us for feeling this way? Mainstream politics lies in tatters, class tension is at an all-time high, and a generous spattering of more-than-dubious events have littered our respective media on an often-daily basis – much to the ironic enjoyment of some. And yet, we still see a curious demand for panels and ‘cultural keynote speakers’ to quizzically deconstruct the 60% rise in adolescent depression since 2010?

As the youngest ANH-Intl team member, I drew the short straw. It’s now my job to deconstruct – largely in words rather than my more normal medium of pictures – a big issue in a small blog. I will attempt to shine a light on what I think appears to be among the most prominent underlying reasons why depression and anxiety are so prevalent worldwide in today’s youth outside of genetic predisposition and trauma.

The carrot and the stick

Addiction is increasingly seen as a driver and it seems there’s not yet any real consensus on which is chicken or egg. Does someone’s addiction drive depression and anxiety or is the mental condition a cause of the addiction? On the advent of this year, the International Classification of Disease (ICD) has added 'gaming disorder' to its ranks, such is the widespread addiction of the young to video games and other digital technologies. To the more tech savvy this may not be so surprising, given the recent question into whether many video games have largely incorporated costly gambling elements – generally in the form of ‘loot boxes’ – as a “potential risk to children and young people”.

But it seems depression and anxiety is perpetuated by a raft of elements that characterise modern living. Generally speaking, how many addicted gamers sip spring water and eat wholefoods? Probably not many. They’re more likely to do sugar, artificial sweeteners and ready-made pizza. The problem of sugar and its close friend caffeine (increasingly added as in its synthetic form to energy drinks) undoubtedly play their part as co-stars.

Energy drink addiction is increasing at a disturbing rate in young adults. Energy drinks hit multiple hot buttons: they’re incredibly accessible, being found in every corner shop, garage and supermarket, plus they deliver instant gratification and a feeling of being ‘rejuvenated’ – or, perhaps more realistically, they put people on a 'high’. For those who are worried the ‘sugar rush’ might do them harm, there’s an increasing plethora of new drinks sold as low or zero sugar with familiar sub-branding using words like ‘Diet’, ‘Lite’ or ‘Zero’ (pointing no fingers). Unfortunately for the consumer, multiple studies have found the artificial sweeteners used in place of sugar can be just as, if not more, harmful, contributing still to the epidemic of type 2 diabetes. The shift of large corporation propaganda to the health conscious is more or less akin to slapping a smiling face on the barrel of a gun: it can’t kill you if the bullets are rubber, but it’ll sure as hell still hurt. As the National Center for Biotechnology Information (NCBI) reported in 2016, there is certainly an implied connection between sugar and caffeine crashes due to such regular consumption of energy drinks and mental health – particularly so in young, developing people. Research is ongoing and there is not yet scientific consensus, probably because Big Food continues to fund so much of the science and isn't prepared to let energy drinks go the same way as cigarettes. For those who rely heavily on coffee throughout their working day, perhaps that link is already too obvious to ignore. Couple this with the ever-strong presence of junk food consumption – about 34% of American children eating fast-food on any given day – and there’s a likely recipe for dietary-driven depression mediated via our delicate gut microbiome.

‘Always Online’ dependency similarly roots deeply into this mentality. The anxiety and reward cycle that delivers instant gratification and underpins digital addiction is surprisingly similar to the effect of sugar or cocaine in terms of its effect on opioid receptors in young brains. Those more in-crowd will have at least been witness to the rise in videos and macro-imagery centred on suicide as the accepted baseline. A good example of this from December was a widely circulated meme involving eating Tide dishwasher tablets. Large sectors of the young, online community tends to be introspective, introverted, yet also narcissistic - myself included. The fact is, being sad is now fashionable.

The term ‘digital native’, coined by acclaimed American author Marc Prensky in 2001, is extremely apt for the natural inheritance of those born surrounded by modern technology – as opposed to the ‘Digital Immigrants’, who adopted it later. Growing up in a dogmatic cocoon of social and digital media, even large tech companies, such as Apple, are being urged to curb the growing addiction of young people, with Ex-Facebook president Sean Parker expressing his grave concerns over the psychological harm the website can deliver by saying “God only knows what it’s doing to our children’s brains.”

The dawn of digital addiction has both its benefit and its beat down. Although commonly cited as diminishing social interaction and the positive effects of exposure to nature, it keeps a steady avenue open for emotional and communal support. This is especially important considering the absolutely shocking figures of adolescent suicide. In 2015 alone, suicide ranked as the second largest cause of death in American 15 – 34 year olds, only beaten by unintentional injury. Perhaps not as shocking when suicidal thoughts and a ‘desire to self-harm’ are listed as the side effects of the SSRI prescribed antidepressants themselves. 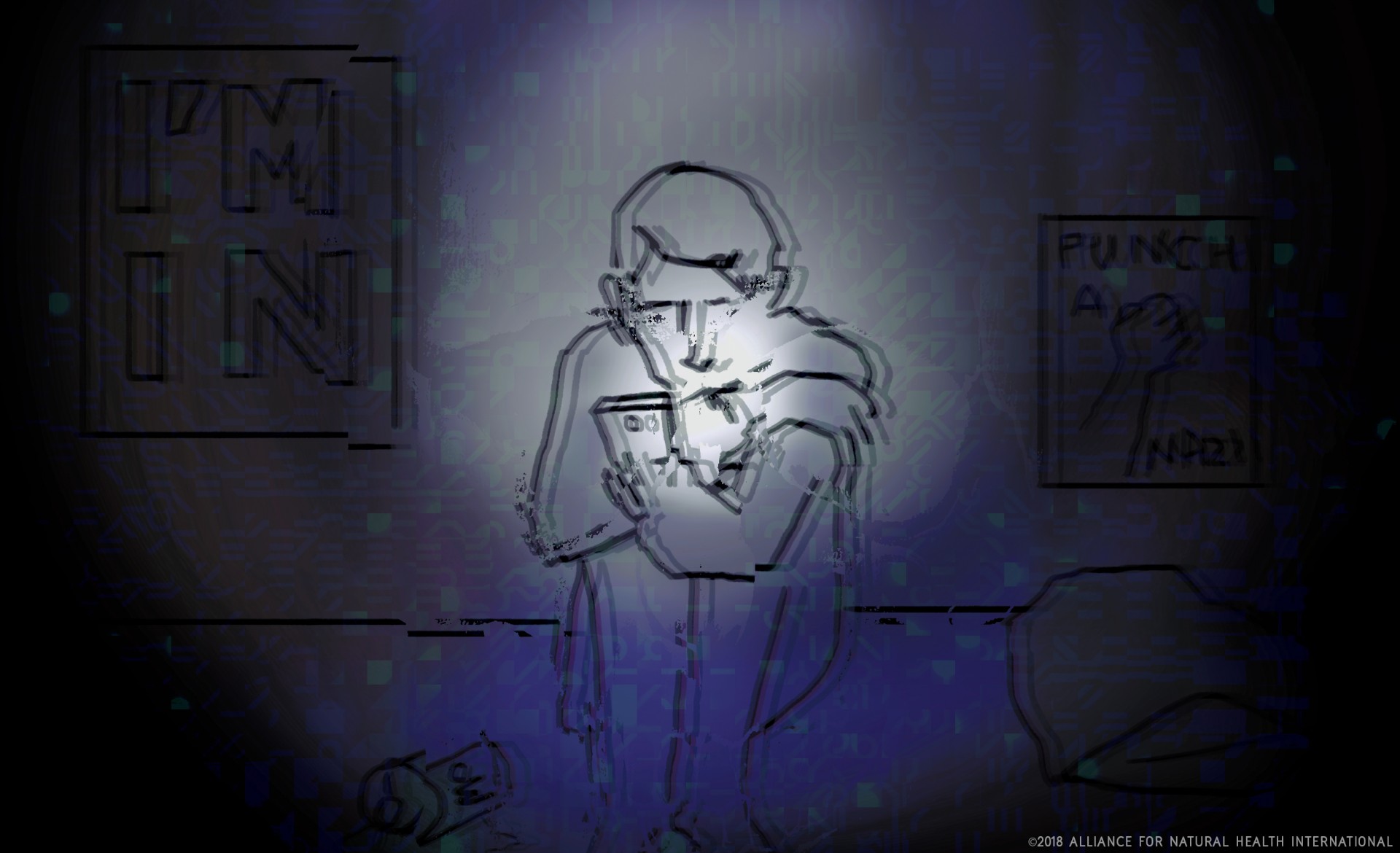 Penny for your (bad) thoughts

Recent political events across the globe have acted as a loud rallying cry for the youth of today. Controversial issues such as Brexit, the election of Donald Trump and the push for Catalonian independence sparked monumental rifts in societal opinion and have no doubt been a key component of anxiety in many – on both sides of each of these divides. From the negative birth of 'snowflake generation' terminology, to the increasing fears of racial tension and rising white supremacy in the US, a large fog of oppression is disseminated by the mainstream media on a daily basis.

For example, the UK’s 2017 General Election sparked a student voter turnout at a 25-year high, driven by a sudden, incensed interest in social justice and equality behind Jeremy Corbyn’s Labour. This, however, left many crushed after a slim Conservative victory – ironic, considering Theresa May’s yet-to-be-seen promises on improving mental healthcare in Britain. Along with rising debt, the damning effect of austerity on the disabled and the tragic ‘Social Murder’ of Grenfell Tower, it would be hard to miss how such catalysts left a sour taste in the mouth of many teens who had already felt disillusioned by their government and politicians in general.

Depression is not some strange phenomenon of the times, but, in my view, rather a direct product of it. In a world still caught in the throes of hyper-industrialisation, it is often seen as hard to find a balanced footing; a chance to feel at ease. Adolescence to adulthood is an incredibly uncertain and frightening period in most people’s lives, regardless of society’s current state. The sudden shift in responsibility, the expectation of knowledge and the burden of responsibility in an ultra-competitive capitalist economy can be a big shock for the unprepared – and the statistics only prove that there are many who feel this way.

So, which factor outweighs the other? Is it the fault of the teenager for conforming to what is now considered normal culture? Or is it the fault of parents for not offering enough love and nurturing, along with strong enough boundaries? Our ancestors clearly realised the importance of teaching the young to hunt and gather, but most kids leave home without sufficient training on how to source and prepare healthy foods.

Whatever the multiple causes, these probably being quite varied and different for different people, we can deduce at least that depression isn’t an incurable disease. In retaliation to the dubiously prescribed SSRI antidepressant, maintaining the right balance of diet, physical activity and relaxation has been shown to work wonders for the human brain and neurotransmitter balance. Take some time to consider what impacts your life the most negatively, and consider how it can be changed, moderated or even cut from your routine.

It’s a fresh year of yet more uncertainty – so why not make 2018 a brand new start for something brighter? You might want to begin by trying to control the things most easily within your reach, such as what, how and when you eat, move and relax. Once you’ve got this covered you can take things to the next level and seek to influence what you can outside your immediate world, appreciating that – together – regardless of our age, colour, race, creed or sexual orientation, we are far from powerless.