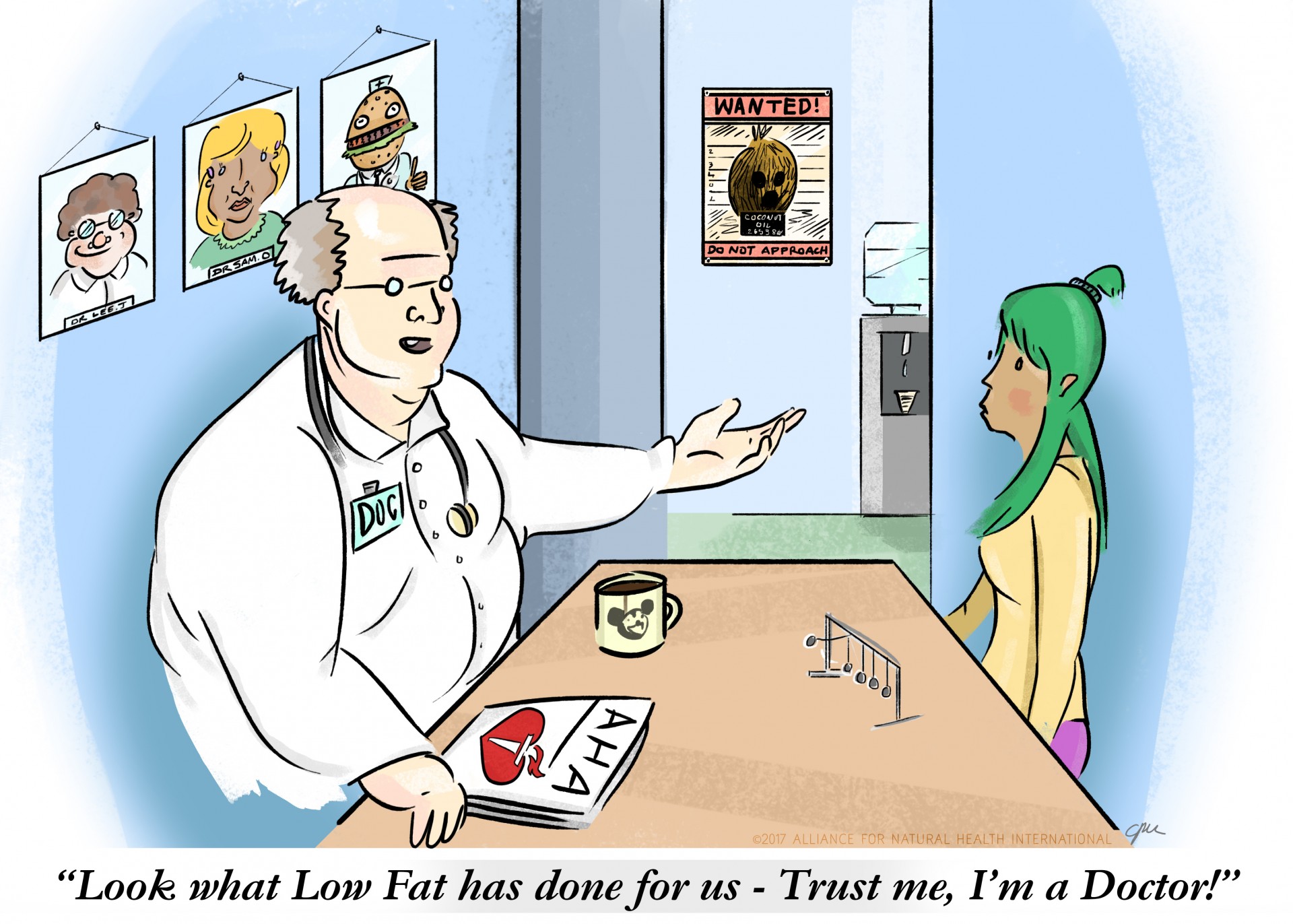 Why the American Heart Association has it wrong — again!!

The latest ‘Presidential Advisory’ from the American Heart Association (AHA) just published in the journal Circulation proposes that we can reduce our risk of heart disease by around 30% by swapping out saturated fats for polyunsaturated fats. This is classic AHA soapbox stuff, and while appearing as a new edict based on new evidence – it’s based on old, limited evidence that has been carefully cherry-picked!

American science writer, Gary Taubes in his compelling rebuttal, classed the AHA’s advisory as a pseudoscientific case of “Bing Crosby Epidemiology” designed to “accentuate the positive and eliminate the negative.”

What’s more, the ‘new’ advice gave the AHA the opportunity to put the boot into coconut oil, which has been widely promoted as a ‘healthy’ saturated fat, given it contains around 80% saturated fat, albeit mainly as a medium-chain triglyceride. This precipitated headlines around the world, BBC News’ “Coconut oil as unhealthy as beef fat and butter” being a typical leader.

So, does replacing saturated fat with polyunsaturated fat really lead to a 30% reduction in cardiovascular (CVD) risk?

In short, probably not for most people, especially if they've removed from their diet a healthier profile of saturated fats, such as that found in marbled meats, ghee, butter – and yes, quality extra virgin coconut oil – and replaced it with cheap, highly processed vegetable oils, margarine and the like.

For well over a decade, researchers have increasingly questioned the relationship between high fat diets and cardiovascular disease (CVD). As early as 2004, a critique in the Journal of the American College of Cardiology rejected low fat diets for the management of CVD. As recognised in the AHA's advisory, cautting back on dietary fats and replacing them with refined carbohydrates and sugars, which has been the common pattern among those opting for low-fat diets, clearly increases heart disease risk. Many high profile scientists have gone on to criticise the diet/cholesterol heart health hypothesis.

The AHA has been able to retain it’s increasingly isolated position by cherry picking evidence. This amounts to the AHA having drawn most of its conclusion from just four 'core' studies that it believes are sufficiently robust to stand up and be counted. The best bit? These studies hail from the 1960s when the saturated fat profile was very different from today, 3 out of 4 studies include only men, and none include younger, healthy populations on diverse, healthy diets. The total numbers of subjects considered in the 4 studies — as far as epidemiological studies go on which public health advice is based — were comparatively small, being 841, 412, 393 and 1,122 respectively (2,768 total).

Other studies, including the Minnesota Coronary Survey, the Sydney Heart Study and, the Women’s Health Initiative have been rejected for a variety of reasons, but notably none of them support AHA’s stated hypothesis of reducing saturated fat intake which “has been and remains based on well-established effects of saturated fat to raise low-density lipoprotein (LDL) cholesterol, a leading cause of atherosclerosis”.

The AHA and many other health authorities around the world have been recommending a diet low in saturated fat since the early 1960s. The AHA guidelines say that not more than 6% of total energy (calories) should come from saturated fat and stresses that this is to ensure LDL cholesterol isn’t raised. The AHA also says that although certain saturated fats like coconut oil might also raise HDL (‘good’) cholesterol, this is irrelevant.

Giving the best possible dietary advice for heart disease is an important job, given it’s well established that diet and lifestyle are the main contributors to risk and CVD continues to be the biggest killer worldwide, currently accounting for 31% of all deaths. Twenty five percent of all deaths in the UK, 1 in 4 Americans and 29% of all deaths in Australia in 2014 were CVD related.

What the AHA omitted to say in its Advisory?

In its apparent effort to cherry pick it’s way through the science and maintain it’s long-held position, there are many things, in our view, the AHA omitted to include or misrepresented. Some of these omissions or errors were:

Managing levels of LDL cholesterol is yet another example of Western Medicine attempting to control symptoms rather than dealing with root cause (not to mention making billions for the pharmaceutical companies). The role of dietary fat in the development of cardiovascular disease is a contentious one and one that is likely to run and run.