2016 has been a year of incredible change. The world is creaking under the weight of social, political and economic crisis. The ‘establishment’, the liberal left, the ruling elite – call it what you like – has been shaken to its core in ways that few of us might have imagined possible as 2015 ended just 356 days ago.

Brexit and Trumpism remind us what happens when the globalisation agenda marches on regardless, at the expense of the masses, and for the benefit of a few, especially the world’s mega-corporations. The reactions in the UK referendum and US election were all the more remarkable given the control of the media by left-leaning, pro-corporate journalists and machinery that cares not a lot about the fundamental rights and freedoms of citizens. In fact, generally speaking, the system benefits from viewing the ‘hoi polloi’ or the ‘great unwashed’ as being incapable of making informed, independent decisions that are in the interests of society, let alone ourselves as individuals. The ruling elite took for granted that the people, ‘sheeple’ even, might just continue to accept unchallenged its deceptive and manipulative language carefully metered. As Orwellian as it might have become, we witnessed in 2016 events, at least in Britain and the USA, that suggested millions had had had enough. It’s not just the resurgence of the ‘populist right’ as some commentators have claimed. It’s about a very deep-seated disillusionment by a massive cross-section of society, including many of who might have previously been non-voters or thought of themselves as being apolitical.

More and more people are properly disillusioned by the establishment. More and more are gaining confidence in standing up against it. The system might pay lip service to the notion of functional democracies and freedom of choice in the West – but many have woken up to this being more of an illusion than a reality. People have become less susceptible to being programmed by the media or by politicians – programmed by someone else’s version of reality.

The choices we make in how we manage our own health cut to the centre of this issue. Are we to still accept that most of us should decay slowly under the inevitable pressure from chronic diseases like type 2 diabetes, cancer, heart disease and dementia? Should we just do what our pharma-trained doctors tell us and allow ourselves to become magnets for an increasing array of eye-wateringly expensive drugs that often don’t work particularly well and leave us reeling with horrendous side-effects?

For the millions of us who know differently, we don’t have to become victims of the medical establishment. We can re-empower ourselves and put ourselves in the driving seat of our own health. By working with, rather than against nature, we can achieve a quality of life in health terms that is unimaginable for those who’ve become unwittingly and unnecessarily drug-dependent.

We don’t like to overplay the fact that there’s a war being waged between those with a vested interest in keeping society trapped within a healthcare system that relies on pharmaceuticals, vaccines, chemotherapy and radiotherapy as its primary tools in healthcare – and the rest of us. Most of these modalities, one way or another, attack or impede the body’s intricate physiology and metabolism that have co-evolved alongside our natural environment over millennia. That’s of course why drug ‘side effects’ are par for the course. Those of us who choose to rely on natural means of healthcare present a major threat to Big Pharma that is entirely dependent on high levels of chronic disease in our society. That’s fodder for another war; a war between Big Pharma and the people who want natural health choice.

Below we present two infographics that highlight some of the most prominent events of the year. Infographic 1 looks at the European natural health ‘battlefield’. Europe has long been one of the key battlegrounds given the deep-seated passion for natural health among so many of its people, as well as it (Germany, Switzerland and France especially) being the birthplace of Big Pharma. 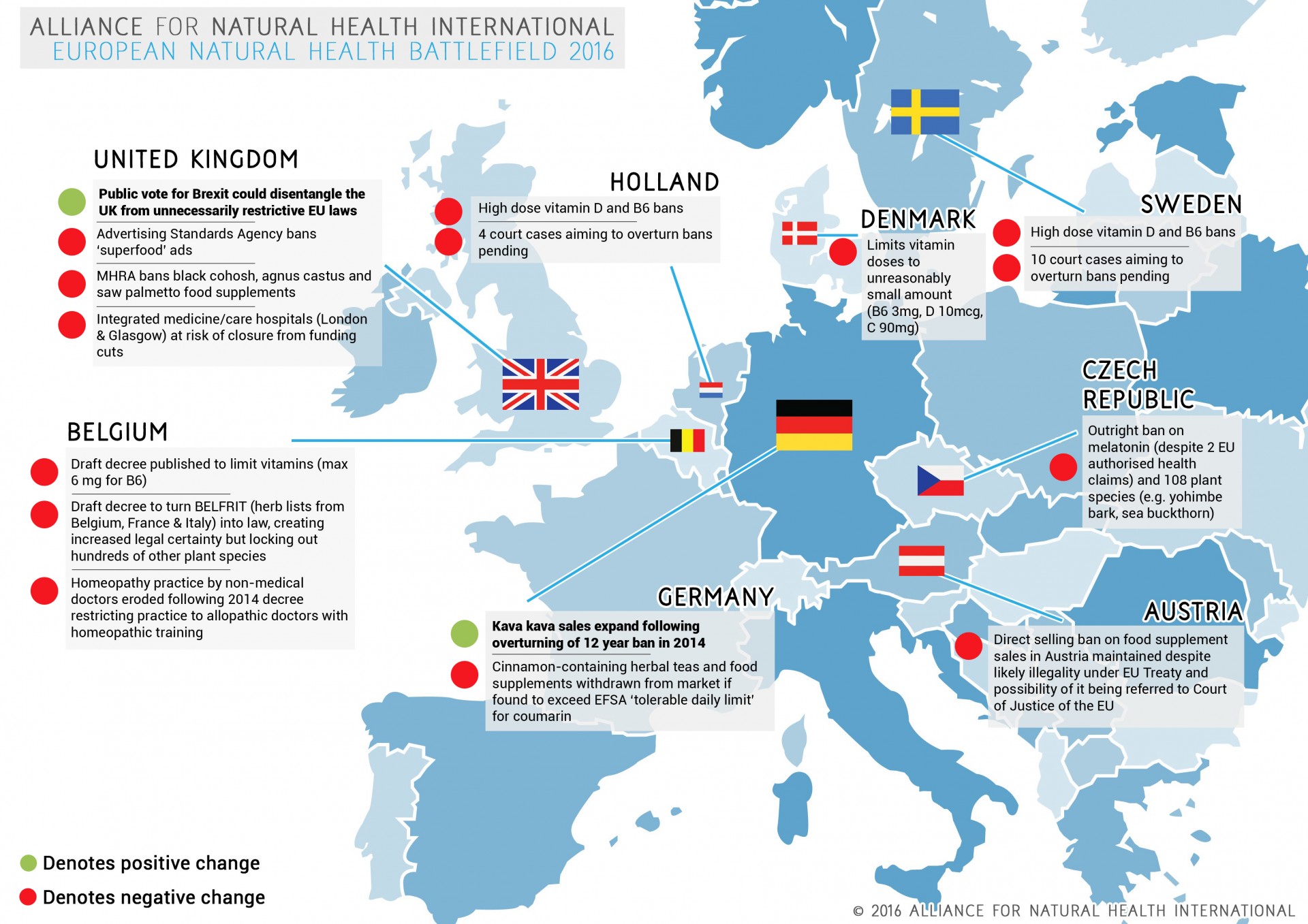 As we see the effects of national rules being applied by EU Member States in the absence of any moves by the European Commission to progress its long-standing commitment to harmonise maximum levels of vitamins and minerals, it’s becoming ever clearer that it’s not just Brussels that’s the problem. When national governments become more restrictive creating a more uneven playing field, more companies – especially bigger ones – become more inclined to pull out of the EU because they can’t benefit from EU-wide harmonisation and they have less provision for mutual recognition so propagating a perverse downward spiral in trade. That’s good for GMOs (note Bayer’s position post-Monsanto buyout), but not good in the case of vitamins where high doses are required for therapeutic needs. Pharmaceuticals which benefit from EU-wide licenses (marketing authorisations) become the winners here – so it’s more important than it’s ever been that safe harbours for natural health are carved out in Europe – and that’s a major focus for our Brexit campaign.

There’s also been a lot of evidence that the EU law-making sausage machine is losing some of its previous vigour. Apart from the European Commission’s shelving of harmonisation of maximum levels of vitamins and minerals, this year’s decision by the Commission to ditch a specific regulatory regime for sports nutrition products and regulate them instead under existing EU food law is another example. Although the European Specialist Sport Nutrition Alliance (ESSNA) deserves much credit for pushing this issue as hard as it has over recent years.

More and more natural health products have fallen foul of EU medicines and novel foods classifications in 2016. Homeopathy, chiropractic and other complementary and alternative medicine (CAM) modalities continue to face a bashing, being kept on the margins of healthcare at best, despite 360,000 healthcare professionals practising one or more CAM modalities in Europe.

This has been an exceptionally busy year for our small and dedicated team here at ANH-Intl and our campaign highlights for 2016 are shown in Infographic 2. 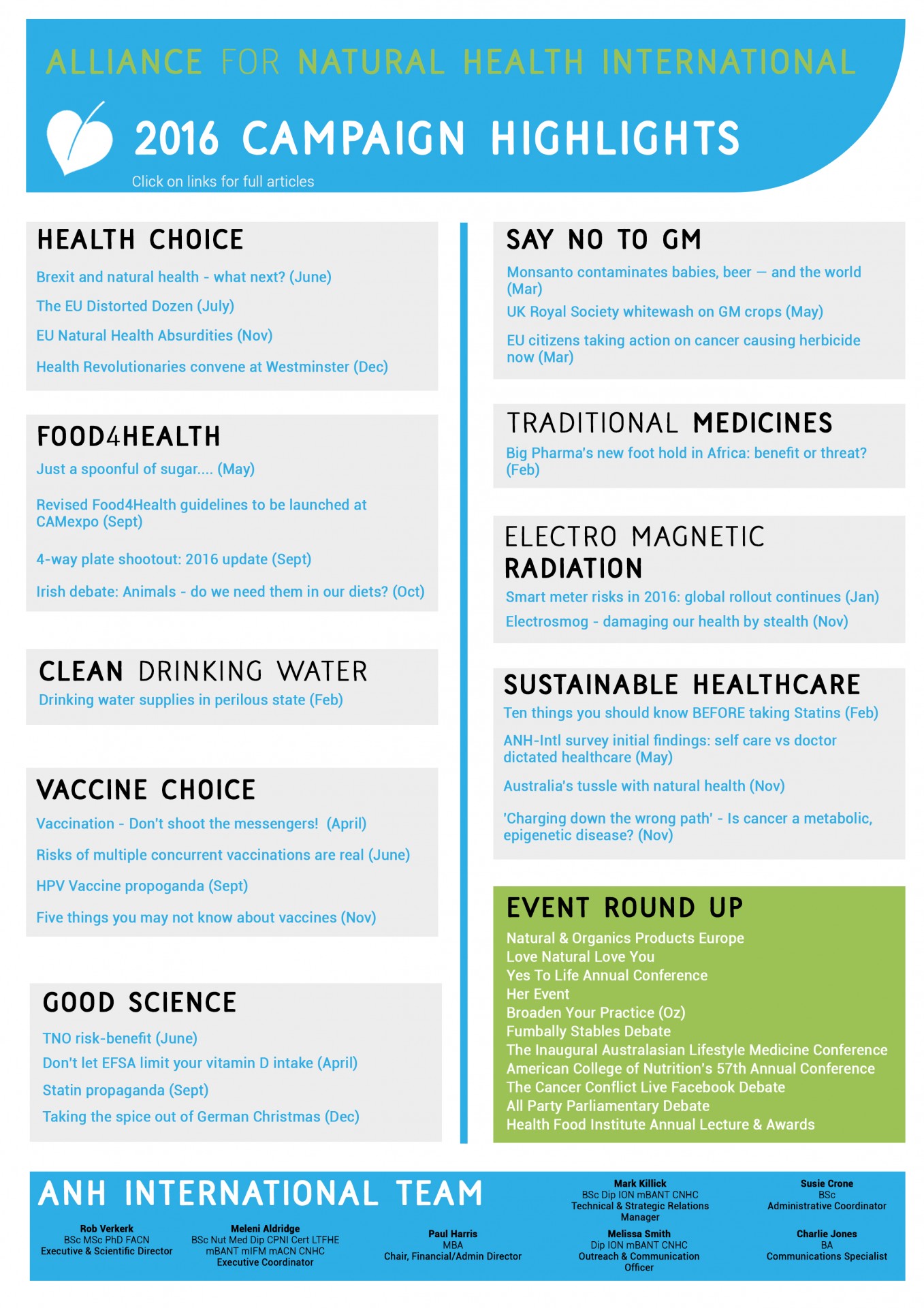 For those who want to see some of our main stories this year chronologically, you can dip into our month-by-month timeline that follows:

‘The Matrix’ – why we need to take combined, not isolated, nutrients

An undeniable fact: autism prevalence set to end society as we know it

Stand and let your mitochondria be counted!

Unlocking clues to cancer: alterations in cell metabolism and microenvironment

Will complementary therapies be sidelined for the terminally ill in the UK?

Can the Low Carb High Fat bubble be burst?

Do antioxidants help or hinder our response to exercise?

Ten things you should know BEFORE taking statins

“VAXXED: From Cover-up to Catastrophe”: new film to premiere at the Tribeca Film Festival

EU ‘in’ or ‘out’: potential impacts on natural health in the UK

Tampon safety – what are the real risks?

Tribeca censorship of Vaxxed – and how to beat it!

De Niro speaks out on Tribeca and Vaxxed

Get yourself ready for your 2016 challenge!

Health professionals from around the world unite in San Diego

Just a spoonful of sugar…

Modifying your lifestyle to restore balance

Our health predicament: How do we know what works and what doesn’t?

SURVEY: Who’s in the driving seat of your health?

#FunctionalForum: expression of a healthcare revolution

Brexit and natural health – what next?

Could you be over- or under-dosing with vitamins or minerals?

Does Cannabis have its place in medicine?

‘Stop the clock’ – unlocking the mysteries of anti-ageing

Eating to light up your body’s energy systems

Should British women only take NHS vitamins if they want a healthy start?

Taking responsibility for our own health

Will EFSA remove any road blocks for nutrients in supplements?

ANH-Intl Feature: Dr Alison Grimston in the spotlight – PART ONE

Breast cancer and synthetic HRT: another nail in the coffin

Fighting for a daughter’s life

To be vegan or vegetarian, or not to be

Revised Food4Health guidelines to be launched at CAMexpo

Update: Fighting for a daughter’s life

Interview with the creator of TreatOut

Irish debate: Animals – do we need them in our diets?

Mayhem or Mayfest? The Brexit opportunity for natural health

‘Charging down the wrong path’ – Is cancer a metabolic, epigenetic disease?

Brexit: the Government’s or the People’s version?

Five things you may not know about vaccines

Has the cancer establishment been ‘tripping over the truth’?

Has the EU shelved HARMonisation of vitamin levels?

Muteness on B vitamins and lifestyle after pharma’s Alzheimer flop

Taking the spice out of German Christmas

Please donate to support our work

Please stay with us and support us in any way you can for 2017. We are 100% reliant on donations and if you value what we do, we ask that you might consider making a donation now to help us help you at this critical time for natural health. Thank you.